By Newsroom on January 24, 2018Comments Off on Festive social ad spending up 54% as brands lean more on paid placement 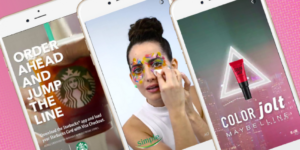 ad spending during the festive period was up by 54% according to data gathered by data science and marketing technology firm 4C.

The report took a sample of the brands using the 4C social platform to compile its ‘The State of Media‘ report. During the fourth quarter of 2017, a sample of $400m in media spend across 1,000 brands found that there was a 28% quarterly increase in paid media spend across the leading social media sites Facebook, Instagram, Twitter, LinkedIn, Pinterest, and Snapchat.

Facebook ad spend was up 125% year on year, improvements in targeting and new features are attributed for this, although the company’s efforts to displace brands and the media with newsfeed algorithm changes can’t be fully denied.

Aaron Goldman, chief marketing officer at 4C Insights, said: “The bottom line is that in today’s multiscreen, multitasking world, brands must manoeuvre more strategically than ever to engage their target audiences. When it comes to “social” in 2018, the best way to break through is with paid placement.”

On the TV advertising front, in the UK, ecommerce firms Amazon and Argos dominated with slots totaling 4,219 and 7,798 minutes respectively.

Goldman concluded: “TV advertising isn’t dying in favour of digital advertising. In fact, it remains a hugely significant part of ad spend, with nearly $200bn spent on TV ads in 2017. With big events like the Six Nations and the Oscars coming up in Q1, it’s important for marketers to leverage audiences across screens during big moments.”

Festive social ad spending up 54% as brands lean more on paid placement added by Newsroom on January 24, 2018
View all posts by Newsroom →