By Newsroom on May 17, 2018Comments Off on ‘Second screening’ makes people more likely to take notice of TV ads, according to MediaCom 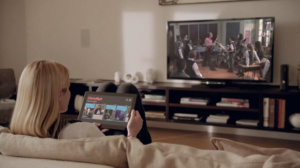 that use their phone or tablet while watching TV are more likely to follow up on a TV advert, contrary to what is believed within advertising circles.

Viewers using a device while watching TV are 75 per cent more likely to actually follow up on an ad, according to research from MediaCom and ViewersLogic.

“In the past few years, the way people watch TV has changed quite drastically; on average, people spend around 30 per cent of their TV time simultaneously looking at their phone or tablet.” Said Pauline Robson, head of insight at MediaCom. “Historically, brands have shuddered at the thought of attention wandering to the second screen. However, our research has flipped that misconception on its head and shown that advertisers should actively look for shows where the audience is most likely to be second screening. Media plans should actively take into account the second screening effect in order to improve efficiency; the opportunities for brands are huge.”

The study of 1,877 people from the UK also found women were more receptive to ads while ‘second screening’, with 59 per cent of their active responses happening while they were on their phone or tablet, compared to 51 per cent of men.

The research also found that people that who second screen are more brand aware, finding a 12-percentage point difference in brand awareness between those who second screened and those that did not in one example. Furthermore, the average number of channel changes a person does when second screening is 10 per cent lower, though 18 to 24-year olds actually changed the channel more while on another device.

‘Second screening’ makes people more likely to take notice of TV ads, according to MediaCom added by Newsroom on May 17, 2018
View all posts by Newsroom →