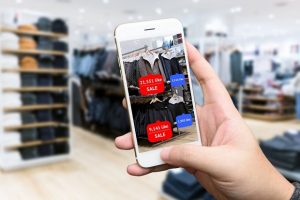 Most UK consumers are not interested in embracing the six technology trends tipped as ‘ones to watch’ in 2017, according to new research.

The study by Code Computerlove, found that mobile payment was voted the digital trend consumers most likely to adopt in 2017, while AR comes last on the list.

It’s the time of year when many decision makers are planning their annual marketing budgets and wishing they had a crystal ball to see which technologies to invest in.

Help is at hand. A new consumer survey has revealed which digital trends – being promoted by industry experts as the ones to watch in 2017 – are technologies that UK adults think they will actually embrace.

And there is a clear message to marketers; a massive 56% of people are not interested in using any of the six trends expected to come to the mainstream this year.

The survey was carried out by digital agency Code Computerlove. Managing director, Louis Georgiou said: “The research reinforces the importance to all businesses of not just jumping on the bandwagon of new technology or asking suppliers to add on digital features just because they’re being dubbed as the ‘next big thing’. It’s all about listening to your customers and creating the services that add real value to their experience – not using ‘hunches’ but applying ongoing testing and data insight to measure this.”

The national survey of more than 2000 UK adults also gauged what consumers are looking for from their digital experiences. 46 per cent of respondents want improvements in the products and services they already use, but made better in 2017. 35 per cent want more responsive customer services while only 30 per cent want true innovation and something that they haven’t seen or experienced before. 22 per cent said that they want to disconnect, spending more time away from screens in 2017.

Of the six major technology trends analysed3, the most popular was mobile payment, with 32% of respondents indicating that they would be happy to make more in-store payments using just their mobile phones versus card or cash. Voice search and talking to their home devices using products such as Amazon Echo, Google Now and Apple Siri was the second most popular answer; a quarter said they are interested in adopting this in 2017.

A quarter of those questioned also said they are interested in VR to explore spaces in 3D using headsets such as Oculus Rift. But despite the huge impact of Pokémon Go this year, Augmented Reality was the technology that UK consumers believe they will be experiencing least of in their everyday lives in 2017. Only 10 per cent of respondents think they will use AR services.

Code Computerlove also analysed how the results compared to how often these terms were searched for online in 2016. Virtual reality receives on average more than 2.25m searches every month, with Augmented Reality a close second with 1.2m searches. Voice assistants4 are searched for 751,000 times in a month.

But it is a different story for what is being talked about on the internet. Despite being the least popular trend in terms of what consumers think they will use, Augmented Reality has been talked about the most on the internet, with more than 24m news mentions in the last 12 months. VR and Chatbots were second and third respectively.

When it came to consumer’s levels of understanding of the major digital trends being predicted by experts, most people (53%) had an understanding of paying for goods and services using mobiles, closely followed by Virtual Reality (40% have heard of and understand this). The least understood trend was screen-less or simple ordering using products like Amazon Dash.

How comfortable consumers are using up-and-coming technologies was also analysed.
A resounding 40 per cent of people claimed to be comfortable with paying for goods and services using mobiles. This was a consistent story across all age ranges. The least was again screenless ordering.

Louis Georgiou, managing director of Code Computerlove, concluded: “Applying new technologies and investing in innovative ways to engage with consumers through digital channels can transform businesses, but it is so often the case that you don’t know whether the tech you’re introducing is going to resonate with real customers until it’s live and they start using it. This is why more and more brands are taking a test and learn approach to digital now. Even when it comes to new digital touch points and services, this form of prototyping and learning is something we massively advocate.”

“Interestingly, despite the nation being apparently gripped by a capability to locate, capture, battle, and train virtual creatures on our phones, it isn’t something they expect to be using more of in the coming year. The clear winner here though is for brands to make their existing customer experiences as frictionless as possible, test and learn to see what customers really want from their digital platforms and continue to build on these successes and insights,” added Louis.

The survey was carried out by OnePoll in November 2016 via an online and mobile poll. The age of respondents was evenly spread between 18 and 55+ and it was national representative.