By Newsroom on August 29, 2018Comments Off on eMarketer: Snapchat in UK ‘to overtake Facebook among 18-24-year-olds this year’ 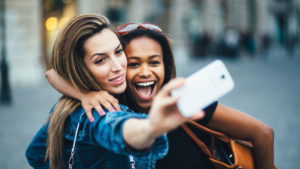 Snapchat will have a larger user base among UK adults ages 18 to 24 than Facebook in 2018, according to new research.

The data, from eMarketer’s latest forecast on social network usage, indicates that the number of Snapchat users in the UK will reach 16.2 million this year, of which 5.0 million (or nearly 31%) will be between 18 and 24.

By comparison, the number of UK Facebook users ages 18 to 24 will total 4.5 million, down 1.8% over 2017. Instagram will have 4.2 million users in this cohort, and 2.6 million will use Twitter. While Facebook-owned Instagram is growing its younger user base, our forecast indicates Snapchat will retain the upper hand in that category in the coming years. 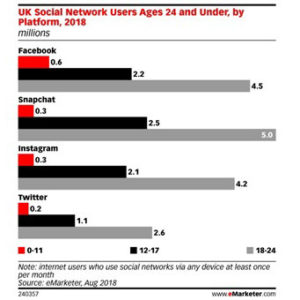 Facebook is still adding monthly users overall, but older age groups are mainly responsible for this. Overall, there will be 32.7 million Facebook users in the UK this year, up 2.0% over 2017.

“These so-called Facebook-nevers are eating into Facebook’s user growth significantly,” eMarketer senior analyst Bill Fisher said. “And while the media giant’s Instagram purchase looks to have been a shrewd move in as much that it’s picking up that young user base, it’s struggling to hold onto the coattails of Snapchat among these cohorts.”

eMarketer defines a social network user as someone who accesses their account at least once per month. See attachment for a detailed explanation of eMarketer’s methodology for Monthly Active Users (MAUs).

eMarketer: Snapchat in UK ‘to overtake Facebook among 18-24-year-olds this year’ added by Newsroom on August 29, 2018
View all posts by Newsroom →