By Newsroom on November 19, 2018Comments Off on Snapchat’s new eCommerce channel lets consumers shop without leaving the app 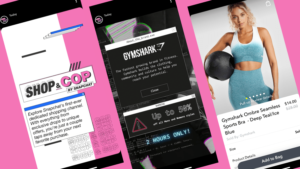 Just in time for the holiday season, Snapchat’s Discover section in the app will have a new channel: “Shop and Cop.”

The channel, which started November 17, includes a native eCommerce experience powered by Shopify, allowing consumers to shop without leaving the app or being directed to a microsite.

To kick it off, Gymshark, a UK-based fitness clothing company is offering 50 percent off select men’s and women’s items for two hours, starting at 2p.m. E.T. Noel Mack, chief creative officer from Gymshark, said the company’s “super excited” to be part of the roll out.

“It feels like the next natural step,” Mack said. “It always comes down to stuff becoming more frictionless. What Snap is doing here feels like the real cool next step and something we’ll all be doing in years to come.”

Now, one might think that this all seems familiar, like Snapchat already does this with its other ad offerings that let consumers shop directly from the app. However, with the “Shop and Cop” channel, which is curated by Snapchat, consumers will only find Shopify merchants selling their wares.

Gymshark is rolling out all of its Black Friday deals on Nov. 19, but thought it was “real disruptive” to release half of them through the Snapchat channel. Mack said Snapchat’s found a way to “mesh” influencers, social and marketing into one cohesive eCommerce experience.

Additionally, the company’s also created a similar campaign on Twitter, through the Blue Robot tool, which lets consumers “sign up” for reminders about an event by liking a tweet. To Mack, both of these are part of putting the “customer first.”

After the Gymshark deal, Snapchat will include more bargains a week later beginning on Black Friday and ending Cyber Monday. Every few hours, one retailer will reveal discounts and exclusive items. Around 20 brands are involved including Kylie Cosmetics, TourLife (artist Drake’s merchandise shop), Chinatown Market and Coco Breezy. 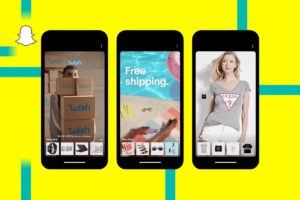 A Snapchat spokesperson declined to reveal the nature of these deals and whether Snapchat is getting a revenue cut from any of these sales.

Snapchat’s news comes right after Instagram introduced three new features to enable easier shopping experiences on the app. Instagram already has a dedicated shopping tab, but it does not have a native eCommerce experience.

“It seems like a right fit for different retailers that were interested in a new opportunity to reach the Snapchat audience,” a Snapchat spokesperson said.

Almost all products will retail for $100 and for now, there’s no current plans of what the channel will hold after Cyber Monday.

Santa’s making his list, checking it twice, trying to find out if Snap has been naughty or nice. We’ll just have to wait for Q4 earnings report.