By Newsroom on August 16, 2018Comments Off on eMarketer: Audience for Connected TV Grows, but Ad Spending Has Lagged 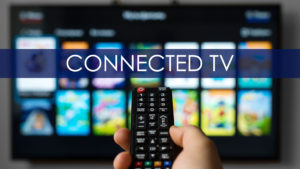 Connected TV households now make up nearly three-quarters of all US households, but those penetration levels don’t necessarily add up to a huge advertising market—yet.

In a new forecast package, eMarketer estimates there will be 182.6 million connected TV users in the US this year, up 8.1% from 2017. That works out to roughly 55% of the population. 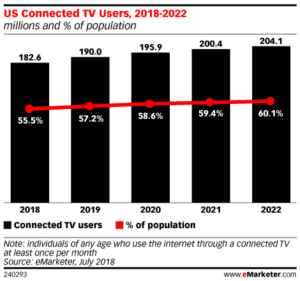 Tru Optik’s 2018 estimate would work out to approximately 12% of overall TV ad spending in 2018. For comparison, we expect digital video advertising will total $17.87 billion this year, which represents 25.6% of TV ad spending and 16.7% of digital ad spending. Our video figure includes advertising that appears before, during or after digital video content in a video player, but does not include social media platforms such as Facebook or Twitter.

The shift to connected TV is not limited to the US. IHS Markit reports that the share of smart TVs—which have built-in connections to the internet—will reach 70% of global TV shipments this year, up from 45% in 2015.

eMarketer: Audience for Connected TV Grows, but Ad Spending Has Lagged added by Newsroom on August 16, 2018
View all posts by Newsroom →