By Newsroom on June 15, 2018Comments Off on Brits heavily favour smartphones over smart glasses for AR experiences 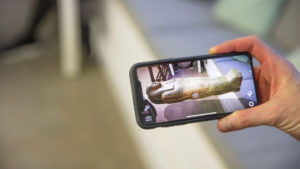 The vast majority of Brits would prefer for augmented reality (AR) experiences to be introduced on smartphones to add to various areas of their lives, as opposed to using smart glasses to accomplish the same tasks.

According to a survey of 1,000 UK smartphone users by Mindshare, which was analysed by OnBuy.com, 87 per cent of Brits would prefer to experience AR effects on social media via their smartphones, while 82 per cent favoured QR code packaging and 78 per cent are open to the use of AR on smartphones to fulfil basic tasks.

Elsewhere, it was found that 71 per cent would prefer using their smartphone to visualise items before buying online and 67 per cent feel the same about visualising ‘how to’ instructions.

The area where Brits are most open to using smart glasses is for wayfinding purposes – with 38 per cent preferring to use them over their phones for that task.

“With established brands in several industries already incorporating augmented reality capabilities within their applications, it is ushering in a fascinating new era of immersive technology,” said Cas Paton, managing director at OnBuy.com.

“An era where the digital and physical world is effortlessly blended by the technologies which underpin AR to create deeper interactions and experiences for consumers. This research certainly shows that Brits are receptive and excited by the different types of experiences created by AR, though their current preference to enjoy them seems to be through smartphones rather than smart glasses. Though as smart glasses become more prominent and their adoption rate increases, the gap between the two devices for AR related activities will surely get narrower.”

Brits heavily favour smartphones over smart glasses for AR experiences added by Newsroom on June 15, 2018
View all posts by Newsroom →