By Newsroom on April 17, 2018Comments Off on Amex cashes in on Coachella with shoppable AR feature

App users can select the on-screen “shop” button and wave their phones to see an AR image of exclusive merchandise. A “buy” button points to another page gated for purchase by cardholders. Enrolling in the Coachella app also offered cardholders a “Spend $10, Get $10” deal when using an Amex card at participating merchants at the festival.

The payment company also hosted special events for cardholders at the festival, including free embroidery, access to an Uber priority lane, free ride on the Ferris wheel and entrance into a club area with drinks and phone charging stations. Platinum card members got access to the Platinum House at the Parker Palm Springs hotel on April 14-15. The VIP area included an immersive architectural installation, exercise classes, fashion collections and live musical performances.

is ramping its use of AR at a time when the technology is showing its potential to drive commerce and content experiences. Amex is smart to leverage strong interest in music festivals like Coachella, which draws a number of major marketing partnerships, to promote its shoppable AR feature and generate excitement among music fans at the annual festival. Amex’s latest AR commerce experience is notable for bringing the technology to a live festival like Coachella, which saw crowds of more than 125,000 people each weekend of the two-weekend event in 2017, suggesting Amex will have a chance to get in front of a similarly large audience this year.

The Amex Coachella shopping experience is the second recent example of AR technology being used to entice attendees at a live event to purchase limited-edition technology. Earlier this year, the Jordan Brand worked with Snapchat on an AR experience at a live event for the brand’s fans that provided exclusive pre-ordering access to a soon-to-be-released new shoe.

The AR shopping feature follows the financial services company’s collaboration this month with Justin Timberlake on a separate mobile AR experience. The “Outside In” feature, which can be found in the American Express Music App, shows Timberlake as a virtual guide for fans who want to delve deeper into the story behind his “Man of the Woods” album, per Billboard. The AR imagery shows a full shot of Timberlake, making it feel as if he’s in fans’ living rooms as he discusses his latest work. 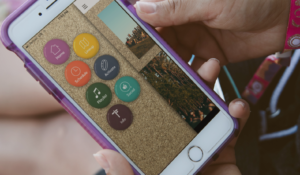 features come as AR technology has started to re-shape the retail experience for smartphone users, especially since Apple and Google created software platforms for mobile developers to more easily create and add AR features to apps, allowing for more advanced immersive capabilities of a wider variety.

Amex overall has begun to look to brand-sponsored events and experiential marketing tactics to more deeply engage audiences instead of relying on traditional TV, print and digital advertising. Last year, the financial services company set up a real-life AR installation at the U.S. Open tennis tournament to immerse fans in the experience of walking out from the locker room onto the court as a tennis star and to be virtually greeted by tennis legends Pete Sampras and Monica Seles.

Brands like Amex that don’t have a tangible product are well-suited for experiential marketing events as a way to engage consumers and keep their brand top-of-mind. Experiential opportunities also encourages social media users to share pictures of themselves with friends and followers online, bringing the brand some earned media. Nearly 70% of brands say that consumers who share content from experiential events have a measurably higher level of brand awareness than customers that don’t share photos or videos, according to a survey by Event Marketer.

Amex cashes in on Coachella with shoppable AR feature added by Newsroom on April 17, 2018
View all posts by Newsroom →