By Newsroom on July 24, 2018Comments Off on 42 % of all UK display ads were not seen in Q2, according to Meetrics’ latest Viewability Benchmarks 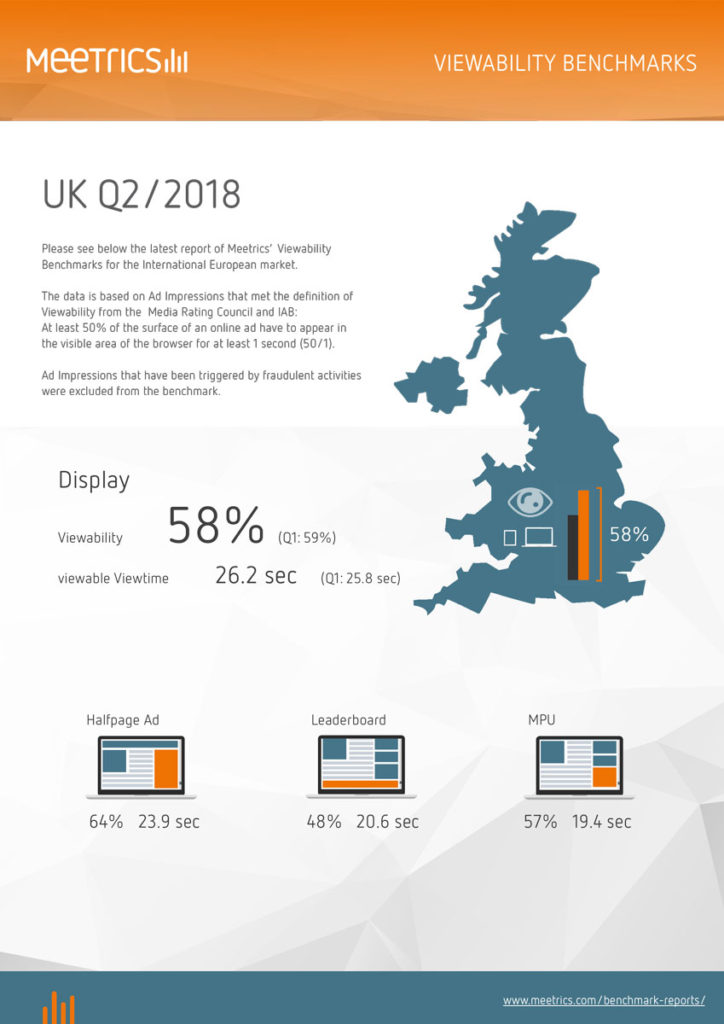 Meetrics‘ latest Viewability Benchmarks show that viewability rates for display campaigns maintained the same level as Q1. Values for banner advertising decreased by one percentage point to 58% in the same period.

Philipp von Hilgers, Managing Director and Co-Founder of Meetrics said: “The UK market has historically been in last place for viewability, but optimisation measures are finally taking effect. Viewability levels for display are stabilising, and values are improving over the long-term. Nevertheless, the UK still has work to do to catch up with performance rates internationally.”

Compared to other markets, the UK still ranks in the lower half of the table. The best viewability rate was measured in the Austrian market at 73%, followed by Sweden at 64%. The international average was 61% in Q2 2018.

The view time in the UK compares favourably internationally. On average, a seen ad is viewable for around 26.2 seconds. That’s almost five seconds more than the international average.

The complete Viewability Benchmarks, including a detailed list of different banner formats. In the quarterly reports, Meetrics provides an overview of Viewability rates and average Viewability duration.

The basis for Meetrics’ Viewability Benchmarks is the “50/1” guideline of the IAB and the Media Rating Council (MRC). At least 50% of the advertising space must have been in the visible area of the browser for at least one continuous second. For video ads, the recommendation is “50/2”, which means the video ad must have been viewable for at least two seconds with at least 50% of its area.

42 % of all UK display ads were not seen in Q2, according to Meetrics’ latest Viewability Benchmarks added by Newsroom on July 24, 2018
View all posts by Newsroom →