By Newsroom on February 10, 2017Comments Off on We Are Social: Unique mobile users increased by more than half compared to 2016 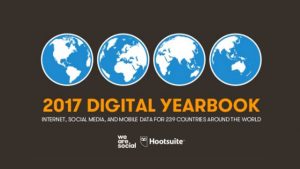 Internet usage grew slightly faster than it did in 2015, while social media users more than doubled in a year, spurred on by mobile, according to a comprehensive global report from We Are Social.

The report also found that the rate of growth for unique mobile users increased by more than half compared to last year, with 81 million more new users in 2016 compared to the growth reported in last year’s analysis.

We Are Social’s 2017 Digital Yearbook, has headline digital user data for every country in the world.

It’s not just the internet that’s growing rapidly, either; We Are Social has identified a wealth of other important milestones as part of this year’s Global Digital report, including: 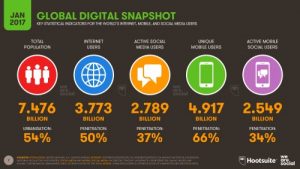 The digital world experienced spectacular growth in 2016, with the pace of change accelerating across almost all key indicators versus 2015.

The headline numbers are:

The pace of change was a key story in last year’s Digital in 2016 report too, but considering that global internet penetration has now surpassed 50%, we were surprised by how much the rate of change continued to accelerate over the past 12 months 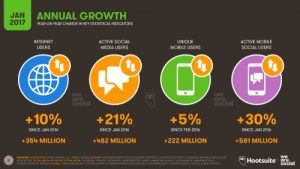 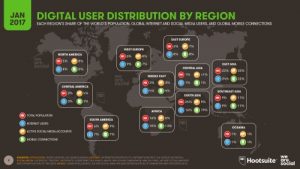 Once again though, it’s the pace of change that tells the most interesting story here: Asia-Pacific accounted for 70% of total growth in global internet users, 62% of the growth in social media users, and 64% of the growth in mobile social media users. The pace of change in APAC show no signs of slowing either, and we’re confident that 2017 will be another bumper year for growth across the Far East, especially in Southeast Asia. 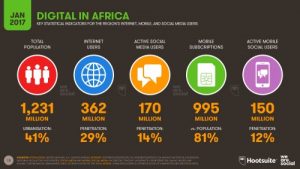 Digital in Africa grew only slightly in 2017, although the internet user data we’re reporting this year reflects some significant source corrections versus our 2016 report. In particular, the number of internet users reported by official sources for Egypt, Malawi, and Eritrea have all been revised down considerably, which has the effect of negating many of the gains posted by other nations.

However, 7 of the 10 fastest growing internet populations in the world are in Africa, with the number of users reported in Ethiopia more than tripling versus the numbers we reported last year. Fewer than one in three people across Africa has access to the internet today though, and current growth trends suggest we’ll be well into the 2020s before we see internet penetration levels across the continent pass the 50% mark.

On a more encouraging note, though, mobile social media use in Africa increased by nearly 50% in 2016, although at just 12% penetration across the region, there’s still plenty more room to grow. 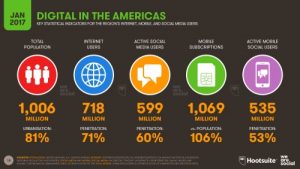 The Americas posted some impressive gains in the past 12 months, with 53 million new internet users delivering an 8% year-on-year growth in regional penetration. Much of this growth came out of Central and South America – perhaps unsurprising given the existing high rates of penetration in North America – but the United States alone contributed 22 million (25%) of the 88 million new social media users across the region in the past year.

The total number of mobile connections across the Americas dropped slightly through the year though, most likely because people have been consolidating multiple subscriptions. This is a phenomenon we’ve been seeing all over the world; increased use of smartphones is enabling greater access to “over-the-top” data services such as VOIP and mobile messaging, most of which are significantly cheaper to use than ‘traditional’ voice calls and SMS, thus removing the need to maintain multiple mobile plans or contracts in order to benefit from intra-network price deals. 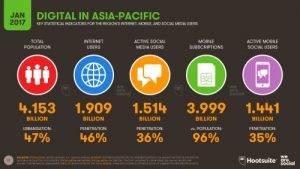 Digital growth across Asia-Pacific accelerated versus growth over the previous 12 months, with internet users up 15% year-on-year to pass the 1.9 billion mark. Social media growth rates accelerated by more than 50% versus 2015, with social media use overall up 25%, compared to 14% growth in last year’s report.

More than 1.5 billion people across APAC now use social media on a monthly basis, with 95% of them accessing platforms via mobile devices – the highest ratio in the world. 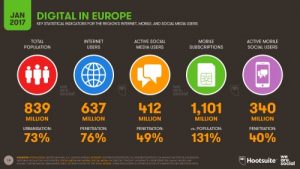 Europe posted slightly slower digital growth than other parts of the world in 2016, but the region is building off a well-established base, so that’s perhaps unsurprising. Internet users were still up 21 million to a new total of 637 million though, representing 3% year-on-year growth.

Social media use in Europe grew by 5% to pass 400 million total users across the continent, while mobile social media was up 11% versus our 2016 report, with 340 million people across the region using social media via mobile devices each month. 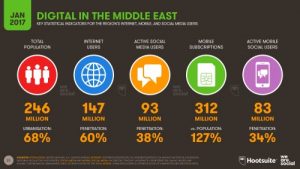 The Middle East claims top spot in this year’s growth rankings though, with all key indicators showing impressive growth. Internet users are up 15% year-on-year, with the regional total rapidly approach the 150 million mark.

Social media use overall grew a staggering 47% in the past 12 months, with mobile social media up 44%. Penetration for both key social indicators remains below 40% though, so there’s still plenty of room for more impressive growth in 2017.

We Are Social: Unique mobile users increased by more than half compared to 2016 added by Newsroom on February 10, 2017
View all posts by Newsroom →