By Newsroom on May 25, 2018Comments Off on KFC gives away Colonel Sanders floaties via Snapchat for Memorial Day

KFC launched a summer sweepstakes where fans can win a limited-edition KFC Colonel floatie. The floatie is in the likeness of Colonel Sanders and features holders for a bucket of chicken and beverages.

Through June 22, fans can visit KFCfloatie.com to enter to win one of the floaties, which aren’t available for sale. KFC announced the contest via a 10-second video with actor George Hamilton playing the Extra Crispy Colonel. KFC also created a Snapchat lens that brings the Colonel to life via an augmented reality (AR) experience. Snapchat users can enter to win a floatie directly from the lens starting on Memorial Day.

In separate news, KFC said it will move its media planning and buying business to its longtime creative agency Wieden+Kennedy after just over a year working with Publicis’ Spark Foundry. The change combines creative, media, digital, data and analytics under one agency. KFC spent an estimated $234 million on U.S. measured media in both 2016 and 2017, per Kantar Media data. 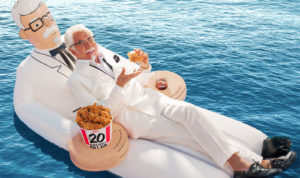 merchandise with a seasonal tie-in has become a running theme in KFC’s marketing, but the brand is bringing trendy mobile elements, including AR, into the fold drive interest around Memorial Day — a holiday when people frequently host cookouts and pool parties. Selfies with novelty pool floaties have also become popular on social media and platforms like Snapchat in recent years, with some linking the trend back to a viral Taylor Swift post from her Fourth of July party two years ago, which featured a pool filled with giant inflatable swans and flamingos, per the Los Angeles Times.

Other brands are hoping to drive summer sales and awareness with merchandise fit for the season. Pepsi, which recently resurrected its Pepsi Stuff loyalty program as part of an ongoing “Generations” campaign, is also offering branded swag like pool floaties and coolers, and started promoting the gear via a TV spot with the country musician Dierks Bentley.

The Colonel-shaped pool floatie giveaway extends KFC’s marketing around its new Crispy Colonel breaded chicken sandwich that launched in April. For the campaign, the brand brought back an actor to play Colonel Sanders for the first time, with George Hamilton reprising his role as the Extra Crispy Colonel.

KFC’s Sanders-centered marketing has proven largely successful since the brand character was brought back in 2015, with creative duties frequently handled by Wieden+Kennedy. The restaurant chain’s decision to move its media duties to the same agency demonstrates that it sees an important link between creative strategy, technology and media, and wants to streamline those operations under roof and potentially cut costs, which is a growing trend among marketers.

KFC gives away Colonel Sanders floaties via Snapchat for Memorial Day added by Newsroom on May 25, 2018
View all posts by Newsroom →