IAB and PwC: Ad spend to continue its climb

By Newsroom on January 4, 2017Comments Off on IAB and PwC: Ad spend to continue its climb 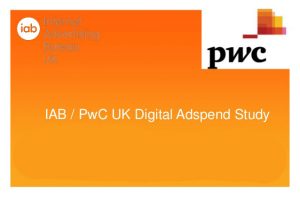 Digital advertising received $17.6 billion in investment from US companies in Q3 2016, according to the IAB’s and PwC’s latest Internet Advertising Revenue announcement.

The report is based on information provided by companies that sell online advertising, including data related to online revenue from web sites, commercial online services, and other activities.

The latest IAB and PwC report confirms that digital ad spend is increasing relentlessly. This is the highest third quarter for digital advertising on record, which isn’t all that surprising given the relative nascence of the digital ad industry, the growing sophistication of ad products and services provided by ad tech firms and platforms, and the ongoing emergence of new players in the space. Altogether, the revenue haul in Q3 2016 represented a 20% increase over Q3 2015, and a 4.3% sequential increase from Q2 2016.

However, the report does not unpack where dollars are flowing within the industry, but only analyzes how much is going into digital advertising as a whole. A more piecemeal analysis from IAB would be useful for painting a more nuanced picture of the health of the digital ad industry, especially given the spate of complaints that Google and Facebook are swallowing the vast majority of ad spend – anywhere from 75-85% by some estimates – as well as virtually all of the industry’s growth, according to Jason Kint, the CEO of Digital Context Next (DCN).

Dollars are increasingly flowing from traditional ads to digital, as strong growth in mobile, video, and social spending continue to change the face of the US media market. 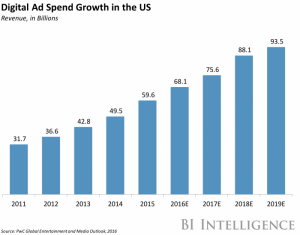 Over the next five years, marketers will especially embrace mobile. Mobile will drive up spending on video, search, display, and social, and propel the migration of ad dollars away from traditional media, including newspapers and magazines.

BI Intelligence, Business Insider’s premium research service, has compiled a detailed report that forecasts spending trends for the major digital ad formats — including search, display, and video — and mobile vs. desktop. It also examines trajectories for social ad spending and programmatic ad buying, which cut across digital formats. Finally, the report looks at how spending on traditional media formats will grow or contract over the next five years, as digital, and particularly mobile, rises.

Here are some of the key takeaways from the report:

In full, the report:

IAB and PwC: Ad spend to continue its climb added by Newsroom on January 4, 2017
View all posts by Newsroom →