By Newsroom on May 4, 2017Comments Off on Growth in mobile ad spend leading to decline in ad viewability levels 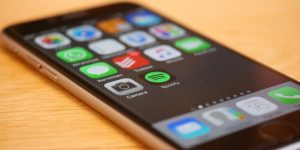 The increase in mobile advertising spend is contributing to a decline in ad viewability levels, according to the latest quarterly benchmark report from ad verification company Meetrics.

While mobile advertising has recently helped the UK’s digital ad spend surpass the £10bn mark for the first time, other forms of digital advertising are now showing signs of stagnating.

According to figures from Meetrics the first quarter of 2017 saw the proportion of banner ads served that met minimum viewability guidelines dropped from 49% to 47% – the lowest level for nine months. Based on the recent IAB/PwC figures, Meetrics suggests around £750 million per year is wasted on non-viewable ads.

“Declining viewability is partly driven by mobile now accounting for over half of display ad spend but tending to have lower viewability rates than desktop for various reasons,” said Anant Joshi, Meetrics’ commercial director UK & Ireland.

“Obviously, the smaller screen size can mean more page scrolling and, thus, more chance of ads being missed lower down a page, plus slower network connection speeds can cause ad loading delays. There’s also the legacy issue of desktop ads served on mobile which don’t format properly, despite the use of responsive design.” 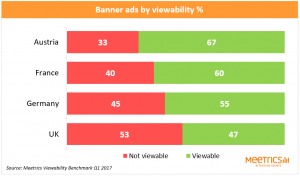 A major factor in the lack in viewability is attributed to the increasing amount of mobile content consumed via apps where ads are more likely to be at the bottom of a page and so are not as noticeable.

Germany saw a 3% decline in viewability to an all-time low of 55%, Austria dropped a single point to 67%, while France rose three points to 60% – all still significantly ahead of the UK’s 47%.

Joshi added: “Unfortunately, we’re still seeing a lot of talk but not the required intense effort to increase viewability and improve campaign ROI. This needs to change.”

A recent report from PwC and the IAB UK found digital ad spend in the UK increased by 17% in 2016 to reach £10.3bn, 38% of which came from mobile. Spend on mobile campaigns was found to have jumped by over 50% to reach £3.9bn while spend on mobile video ads specifically doubled to £693m.

Growth in mobile ad spend leading to decline in ad viewability levels added by Newsroom on May 4, 2017
View all posts by Newsroom →