By Newsroom on March 5, 2018Comments Off on Digital drives ad spend growth in Hong Kong, according to the Hong Kong Advertisers Association 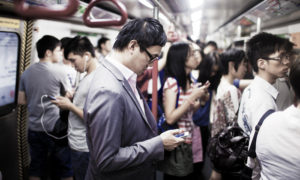 Online advertising, including interactive and mobile, accounted for 55% of advertising budgets in Hong Kong in 2017, according to a new survey which suggests online channels will continue to drive ad spend growth in 2018.

The Advertising Spending Projections 2018 survey, conducted by research firm Nielsen on behalf of the Hong Kong Advertisers Association, also revealed that total adspend in 2017 was HK$41.9bn, an increase of 4% compared with 2016.

The survey, which included many of the top-spending advertisers in Hong Kong, found that 38% expect the territory’s economy to pick up in 2018, with a third (33%) planning to increase their spending while about half (53%) will keep their budgets unchanged.

One changing trend identified in the report is that instead of advertising funds being shifted from offline to online and mobile channels, 31% of advertisers are now gaining additional funding to support online marketing.

As explained by Cherry Lau, Senior Director of Media at Nielsen Hong Kong, projected adspend for 2018 is expected to reach 59% for online and 41% for offline.

Some 41% said TV was keeping some of its competitiveness, but only 2% of advertisers said they regarded print as an effective channel.

“With online becoming the mainstream, there is no doubt that mobile will become pre-eminent over the next few years,” Lau said. “Even though advertisers now have more experience and control in using online and in online/social marketing tactics, marketers are still keen on having cross-channel optimisation and online measurement to help them make better decisions.”

Digital drives ad spend growth in Hong Kong, according to the Hong Kong Advertisers Association added by Newsroom on March 5, 2018
View all posts by Newsroom →