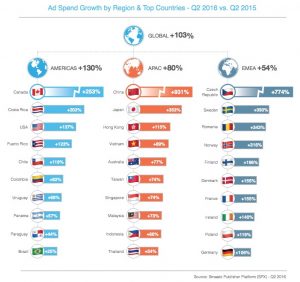 China is, by a sizable margin, the world’s fastest growing mobile advertising market. The east Asian giant saw mobile ad spend rise 931% in Q2 2016 over 2015, according to data from mobile ad platform Smaato.

This compares to an overall rise in mobile ad spending increasing 103% globally.

Other notable jumps were seen in in Japan (+353%) and Hong Kong (+115%) versus the same quarter last year. APAC overall saw impressive jumps, growing 80% year on year, which outpaced that of Europe (54%), but was lower than the more developed markets in the Americas that grew at 130% year over year. 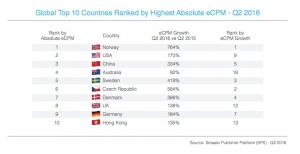 With the exception of Taiwan, East Asia is growing faster than Southeast Asia, where Vietnam was the fastest growing market at 89% followed by Singapore, Indonesia and Thailand.

The report also found that, in terms of the value of the market calculated by eCMP, or ‘effective cost per mile’, China is saw its growth rise at twice the rate of the US.

According to Smaato, the Music subcategory of Arts & Entertainment – with its heavy Gen Z and Young Millennial appeal – is the largest ad spending category on the Smaato platform. Music is more than 50% bigger than the next largest Society category (which includes all dating apps, another subcategory favored by Young Millennials and Gen Z). 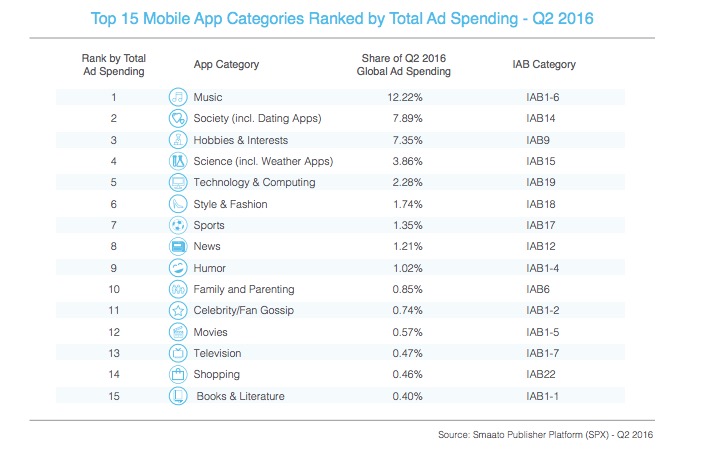