By Newsroom on December 5, 2017Comments Off on Buzzfeed and Brit+Co use OmniVirt technology to deliver innovation in 360° Creative 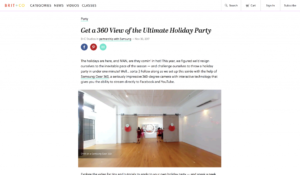 Buzzfeed and Brit+Co are using OmniVirt’s technology to deliver 360° photos and interactive 360° video for the latest Samsung holiday campaign.

In its continued effort to promote ways that people can create and share 360° content, Samsung has teamed up with Buzzfeed and Brit+Co to showcase the power of its newest Gear 360 camera. Both campaigns developed their creative using content shot on the Gear 360. In doing so, Samsung is showcasing what is possible with its latest camera technology. To deliver these experiences on the web, both Buzzfeed and Brit+Co took advantage of OmniVirt’s 360° VR technology.

“Comparing both campaigns showcases the creative flexibility that the 360° format provides,” notes Brad Phaisan, CEO of OmniVirt. “While both publishers used the same camera and 360° format to deliver their respective message, the final deliverables were very different.”

Buzzfeed’s take on the 360° creative uses the form of embedded 360° photos in their article pages. The articles “Have You Ever Taken A 360 Photo?” and “We Threw A Holiday Party In November Because We Just Couldn’t Wait” both show the Buzzfeed audience how easy it is to capture a 360° photo. The campaign invites users to submit their own 360° holiday photos for a chance to be promoted by Buzzfeed and Samsung.

Brit+Co leveraged interactive 360° video to create a shop-able holiday party experience. Within 90 seconds, a blank room is transformed into an epic holiday party, adorned with all the seasonal elements you would expect from Brit’s team. Clickable hotspots appear throughout the video, giving the audience the opportunity to click through to Brit+Co DIY tutorials or to learn more about the Gear 360 camera and Gear VR.

360° videos and photos continue to be a new format that brands and publishers are leaning into as part of their marketing campaigns. 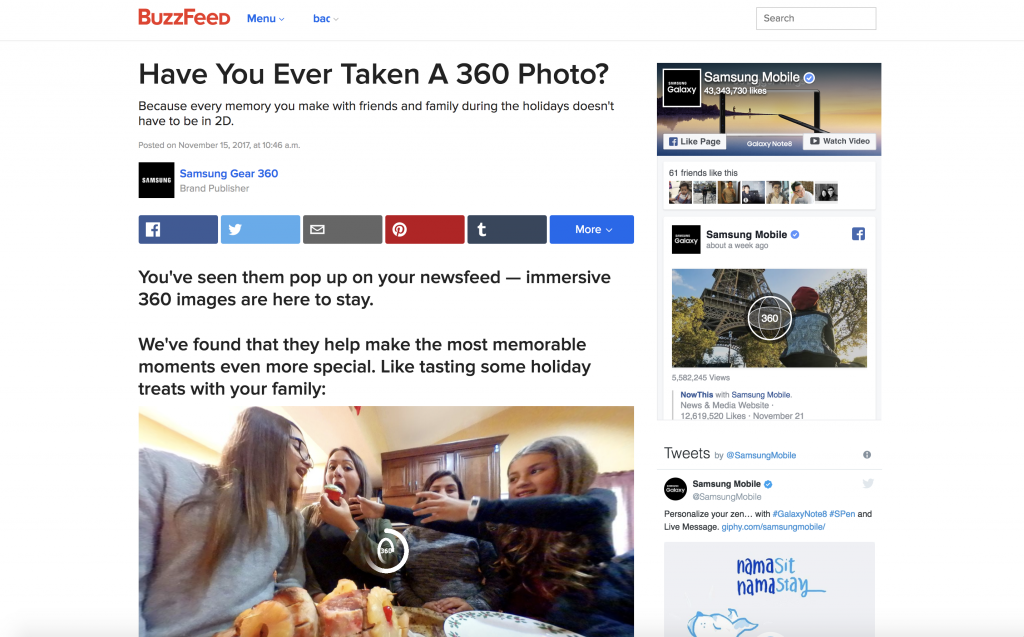 Buzzfeed and Brit+Co use OmniVirt technology to deliver innovation in 360° Creative added by Newsroom on December 5, 2017
View all posts by Newsroom →