By Newsroom on December 12, 2016Comments Off on American Eagle Outfitters uses Snapchat Spectacles to film influencer ads in Hong Kong

American Eagle Outfitters has used Snapchat Spectacles in Hong Kong, despite the product not having launched there, as part of a video-led campaign.

The #WeAllCan campaign, by TBWA in Hong Kong, is primarily an influencer campaign that used the new technology to film first person point of view shots to give a more authentic look to the content.

To highlight its tech credentials the brand is now also giving people a chance to win one. It has extended the theme of the campaign to ‘I Can Give’, which encourages people to engage with the brand to win a Snapchat Spectacles that they can gift to a friend for Christmas. 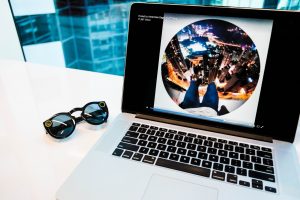 Jan Cho, general manager, TBWA Hong Kong, said: “Our methodology is to look for real-life, cultural triggers and the launch of Snapchat Spectacles is a good fit and a natural opportunity for the #WeAllCan campaign. The spectacles are a bold, forward-looking product that is likely to resonate with early adopters. To be the first, we actually had to bid for them on ebay because the Snapchat Spectacles vending machines haven’t even come to Hong Kong. But Snapchat is very popular for this demographic in Hong Kong and from a brand point of view, Snapchat Spectacles really celebrates the voice of the millennial generation.”

The campaign wants to tie into the concerns and passions of the ‘millennial generation’ in Hong Kong and so used influencers, such as singers Wong You Nam and Sukie Chung and local YouTubers and filmmakers 火雞姐 (Yanki Din) and Felix Yu from Bomba Channel.

Jeremy Tang, VP Greater China at American Eagle Outfitters, said: “The future, being in control, speaking the truth, and appreciating the idea that you only live once, are all themes that this generation think about constantly. That is something that we hope to continue to explore using the new American Eagle Outfitters #WeAllCan brand platform that we’ve created.”