By Newsroom on March 26, 2018Comments Off on Alibaba-backed Lazada extends its eCommerce lead in Malaysia, according to iPrice Group 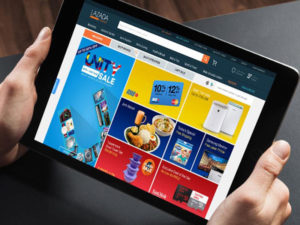 figures by the Department of Statistics Malaysia indicate the digital economy has contributed 18.2% to the Malaysia’s GDP, amounting as much as RM290.9b in 2016. Since then, eCommerce has continued to grow at a rapid rate as both government and private sectors continued to heavily invest into the digital industry.

To keep track of this fast-paced tech economy, the Map of eCommerce was created to ascertain the key players in the country and reveal key insights for Malaysians.

1. Lazada extends its lead in Malaysia

Until its competitors are able to find an answer to Lazada’s dominance, the Alibaba-backed eCommerce site looks set to widen its lead as its Chinese investors further pump in US$2b (RM7.83b).

Shopee also saw impressive growth as they replaced Lelong as the 3rd most visited eCommerce site in Q4 2017. This comes not long after their parent company SEA obtained US$550m (RM2.1b) in funding on September 2017 with plans to utilise most of its funds to develop its eCommerce platform.

Though Lazada leads in terms of website traffic, Shopee overtook Lazada to rank as the best app on both Google Play and iOS App stores. This is significant as Southeast Asia is a mobile-first region where consumers are more likely to search and compare products using mobile devices.

Our recent whitepaper study on the State of eCommerce SEA saw 74% of online traffic in Malaysia sourcing from mobile devices (both smartphones & tablets). Shopee has been a mobile-first eCommerce site since its inception in 2015, launching its mobile application as a mobile C2C marketplace across Southeast Asia.

Runners up after Shopee is Lazada, 11street, Zalora and Lelong. The mobile shopping app is ranked on the highest number of downloads, least number of uninstalls, engagement (app usage), revenue, consumer ratings and others.

3. An average 30% increase in online traffic due to year-end promotions

Malaysia’s top 50 eCommerce platforms experienced an overall 30% increase in online traffic due to year end sales. In fact, all vital eCommerce sale periods took place in the last months of 2017. Among the most popular online sale periods were #MYCyberSale (9-13 Oct), 11.11 Sale (also known as Single’s Day on 11 Nov), Black Friday (24 Nov) and 12.12 Sale (12 Dec). The most popular sale period was 12.12 Sale followed by Singles Day where searches for promotions on Lazada, Shopee and Zalora were the highest in 2017.

The top five eCommerce platforms in Malaysia Lazada, 11street, Shopee, Lelong and Zalora have created more than 1,000 jobs in Malaysia. This figure was found by searching for staff who were working in the mentioned eCommerce companies in Malaysia.

The number of persons currently working in the top five could be even higher as not all employees have a LinkedIn account. Nevertheless, this is a significant number given that the Malaysian government expects its digital economy employment to surpass the global average by 2025.

Malaysia’s local fashion brands were more popular on Instagram when compared to regional and international players such as Zalora, Sephora and Lazada. The three most popular eCommerce platforms on Instagram are Bella Ammara, Naelofar Hijab and Fashion Valet. Among the three players, Fashion Valet is among the oldest fashion-centric eCommerce sites, which has been in Malaysia since 2010.

Malaysia’s fashion eCommerce is among the most active on Instagram, where they publish engaging content on a regular basis and partner with various celebrities and Insta influencers to garner further customers.

Alibaba-backed Lazada extends its eCommerce lead in Malaysia, according to iPrice Group added by Newsroom on March 26, 2018
View all posts by Newsroom →