We Counter Hate Turns Hateful Tweets into Donations for Equality

By Newsroom on February 13, 2018Comments Off on We Counter Hate Turns Hateful Tweets into Donations for Equality

WeCounterHate is a new campaign by POSSIBLE that seeks to reduce hate speech on Twitter by turning retweets of these hateful messages into donations for a good cause. 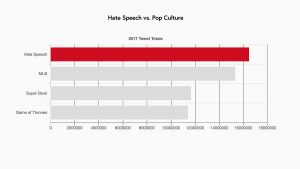 What topic gathers more tweets and retweets than the MLB, the Grammys and the Super Bowl? Hate. Racist messaging is unfortunately one of the more popular topics on Twitter.

Recognising this, the WeCounterHate campaign was created. Using Spredfast’s machine learning technology, it first identifies hateful speech on the platform. A human moderator then selects the most offensive and most dangerous tweets and attaches an undeletable reply. It informs recipients that if they retweet the message, a donation will be committed to an anti-hate group (currently, this is Life After Hate, a group that helps members of extremist groups leave and transition to mainstream life).

Ultimately, WeCounterHate is seeking to change not merely perceptions but behaviour. Because retweeting is so easy, most people do it with hardly a thought. 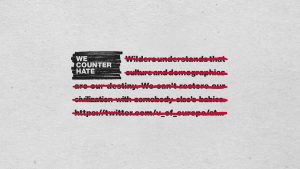 By making them pause, the campaign causes them to think about what they are doing, and hopefully encourage them to start acting differently. And, of course, the biggest goal is to reduce the amount of hate speech on the Internet.

In its pilot launch, WeCounterHate proved successful, reducing the retweet rate of hate speech by 66%. But there’s a lot of work left to be done. To find out how you can support this promising effort.

We Counter Hate Turns Hateful Tweets into Donations for Equality added by Newsroom on February 13, 2018
View all posts by Newsroom →