By Newsroom on January 4, 2018Comments Off on Users may soon be able to post their Instagram ‘Stories’ on WhatsApp 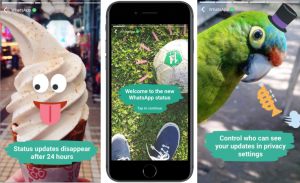 is running a small test to let users post their Instagram Stories directly as a WhatsApp Status. The new feature will let users post decorated photos, videos and GIFs on WhatsApp, which will disappear after 24 hours.

“An Instagram Story posted as a WhatsApp Status also becomes encrypted like the rest of WhatsApp,” TechCrunch reported on Wednesday. “We are always testing ways to improve the experience on Instagram and make it easier to share any moment with the people who matter to you,” a Facebook spokesperson was quoted as saying.

Users may soon be able to post their Instagram ‘Stories’ on WhatsApp added by Newsroom on January 4, 2018
View all posts by Newsroom →