By Newsroom on April 18, 2018Comments Off on Snapchat launches ‘shoppable’ augmented reality feature in Lenses 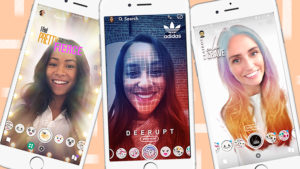 is rolling out a new ‘shoppable’ augmented reality (AR) Lens feature for advertisers around the world.

Shoppable AR Lenses serve as an extension of sorts to Snapchat’s existing shoppable ads that allow marketers to engage with potential customers natively through Snapchat. Back in 2015, Snap rolled out its machine learning-based Lenses feature that allowed users to share images of themselves with funky effects planted on their face. The company later introduced sponsored Lenses for advertisers, which effectively encourage users to overlay advertisements onto selfies.

Now advertisers will be able to include a button on their sponsored Lens that can carry out a number of actions, such as letting users visit a website, watch a promotional video, install an app, and more.

Four brands are on board for the launch, including Clairol, King, STX Entertainment, and Adidas.

The launch comes a few months after Snapchat launched its first desktop app, Lens Studio, which enables anyone to create their own AR Lenses. The company also recently opened its Marketing API for all developers to use, allowing any third-party technology and creative body to deliver ads on behalf of brands and agencies. 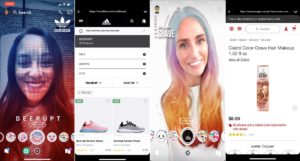 AR is very much where it’s at right now across the technology spectrum, and Snapchat has been investing heavily in the medium. For example, it recently launched 3D Friendmojis that transpose virtual versions of you and a friend into an AR world.

Snap said that more than 70 million of its users “play with Lenses in the Snapchat camera every day” — with an average three minutes of playtime each day — while sharing 250 million snaps with some form of AR involved.

Snap is keen to promote these stats, as it wants advertisers on board for the ride. Marketers want to talk to millennials in their own language, and if that language is increasingly spoken in an AR vernacular, shoppable AR lenses could prove fruitful.

“Because the camera and AR sit at the heart of Snapchat, we believe we’ve driven mainstream awareness for the medium,” a company spokesperson said.

“Shoppable AR Lenses give brands a new way to leverage our unique scale — more than half of the 13-34-year-old population of the U.S. plays with our AR Lenses each week on average — to drive real and measurable ROI, whether that’s through sales, downloads, lead gen, or video views,” added Peter Sellis, director of revenue product at Snapchat.