By Newsroom on March 20, 2018Comments Off on Pinterest expands shopping ads for retailers 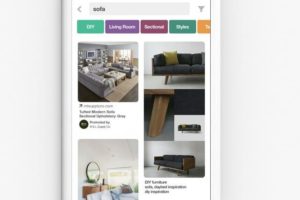 will soon find a wider selection of ads available to them on Pinterest. The visual search company is expanding its “Shopping Ads” feature, which was tested with a handful of retailers last year. The ads, which consumers see in their Pinterest search feeds, will now be available to hundreds of other brands after a successful pilot, Pinterest executives say.

“It goes back to the core mission of helping people find and discover new products that they would love to buy,” says Jon Alferness, who joined San Francisco-based Pinterest as senior VP of ads and commerce last year from Google. He says that as an automated advertising product, Pinterest’s “shopping ads” take away a lot of the legwork for brands used to managing their own campaigns and advertising based on performance. Retailers can upload their product catalogs and showcase products in context—a couch in a decorated living room, for example, which consumers can click through and purchase on the brand’s site.

“The goal is to align with the visual nature of the platform—that’s what makes Pinterest stand out, that discovery mindset,” says Alferness. “With products on a white platform, there’s no inspiration, you’ve got to bring it to life.”

The expanded offerings are a challenge to Google’s own retail ads, called “product listing ads.” A recent report from Adthena, a London-based analyst of AI and machine-learning research, found that Google shopping ads comprised 80 percent of all retail search spending of U.S. and U.K. advertisers in the first quarter of 2018.

Yet the Pinterest platform works as “referral marketing,” according to Ashley Fletcher, VP of marketing at Adthena, who notes that advertisers can directly target Pinterest users who have already “pinned” products they like. 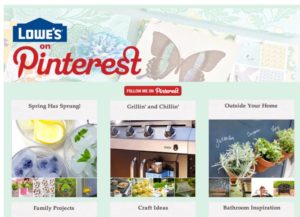 this is a journey that happens away from Google Search. It’s a full user journey through intent to purchase,” she says. “Google’s lack of a social product is simply holding them back here.” Fletcher says that Pinterest will have to grow its demand.

Alferness says Pinterest is scaling the product from an invitation-only offering with two dozen retailers to an expansive program for hundreds in the coming months.

As one of those early adopters, Lowe’s has already seen success, according to Shannon Versaggi, VP of targeted marketing at the home-improvement chain. Lowe’s saw a 20 percent higher click-through rate on “shopping ads” on Pinterest during the period of June through September of last year, compared with an average Pinterest ad campaign that ran in the year-earlier period. The retailer, which has advertised on Pinterest since 2012, focused the trial campaign on kitchens, home décor and seasonal categories.

“Taking on a project [like a renovation] takes some work—how does it all come together? You need a boost in confidence to know it’s all going to look right and that’s where Pinterest ‘shopping ads’ come in handy,” says Versaggi. “We found it to be incredibly effective with that style-driven audience.”

Pinterest expands shopping ads for retailers added by Newsroom on March 20, 2018
View all posts by Newsroom →