By Newsroom on March 10, 2017Comments Off on Nearly 25% of small businesses not using social media 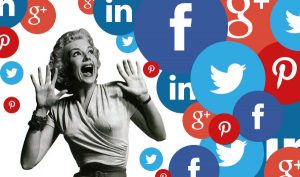 A significant number of small- to medium-sized businesses have not yet adopted social media, according to new research.

The survey was conducted by Clutch, a leading B2B ratings and reviews firm, to gauge digital marketing habits and goals for small businesses in 2017. The series includes reports on mobile apps, web design, and more.

“Many [small business owners] read the headlines from 5-6 years ago about ‘likes’ not mattering and bought into that,” said Joshua Dirks, CEO of Project Bionic, a Seattle-based creative marketing agency. “They are missing out because of their own viewpoint on the topic, [made] from believing 5 to 6-year-old headlines and not recapturing the maturation of the space.” 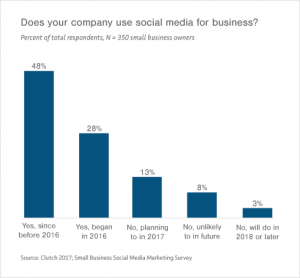 Experts also emphasized the benefits of social media marketing over traditional marketing channels. “Social is one of the few forms that allows you to look at the data,” said Keith Kakadia, Founder and CEO of Sociallyin, a Mississippi-based social media agency. “It allows you to determine whether there’s a return on investment (ROI) for the money spent. When you have a small budget, every single dollar needs to be spent on what works.”

“In general, Facebook is a beast. Its reach is incredibly vast, with almost 2 billion users,” said Alex Oesterle, owner of Blue Bear Creative, a Denver-based social media agency. “No matter what a business does, its customers are likely on Facebook, at least in part.”

Over half of small businesses that already use social media indicate that they want to increase investment in Twitter, Instagram, and YouTube in 2017. Each channel has its benefits, according to social media experts interviewed about the survey findings. 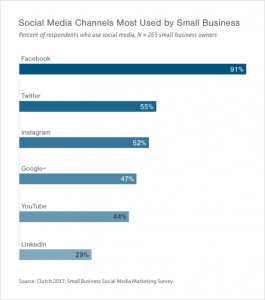 Instagram, with over 600 million users in the United States, may be the best option for small businesses to explore, said Dirks.

Over half of small businesses currently use in-house staff for their social media marketing. A little over one-third use either a freelancer/consultant or social media management software.
Experts cite the importance of placing someone knowledgeable in charge of social media. “One thing we hate to see is handing social media off to an intern or a freelancer with no knowledge of branding or strategy,” said Oesterle. “It makes for lackluster results and perpetuates the cycle of cutting social media costs.”

The full report by Clutch can be found here.

Nearly 25% of small businesses not using social media added by Newsroom on March 10, 2017
View all posts by Newsroom →