By Newsroom on February 13, 2018Comments Off on Mobile ads reached more online consumers in Philippines in 2017, says Nielsen

advertising dominated digital ad campaigns in the Philippines, while at the same time, “on target” mobile ad performance outpaced digital ads served via desktop and total digital last year, according to a report by media research firm Nielsen.

The Nielsen Digital Ad Ratings Benchmarks report, which assessed more than 3,000 digital campaigns since its launch in Southeast Asia in 2015, found that, in the first half of 2017, 91 percent of digital ad campaigns were targeted toward mobile devices, and these achieved higher on target success than total digital and desktop benchmarks for all reported age benchmarks in the country.

Digital ads targeting the 18 to 49 year old age bracket reached their intended audience 81 percent of the time for mobile, compared to 77 percent and 59 percent for total digital and desktop platforms, respectively.

For digital advertising campaigns intended for consumers aged 21-34, those which were served via mobile devices hit the mark 81 percent of the time, surpassing desktop and total digital performance which only reached audiences with 41 percent and 73 percent accuracy.

“The increase in mobile advertising reflects the growing penetration of mobile and the mobile-first habits of consumers in the Philippines,” Nielsen Philippines’ head of media client service Tin Amper said in a statement.

“While historically, ads served on desktops have had great success in reaching intended audiences than mobile, marketers have made considerable progress in rapidly increasing mobile’s on target performance in the past year,” he added.

A closer look at categories also revealed that advertisers in the consumer packaged goods; business and consumer services; and computers and electronics sectors had the easiest time reaching their desired audience via mobile devices, achieving an on-target success of 83 percent, 82 percent and 81 percent, respectively.

“Mobile is winning today but tomorrow is a different scenario,” Amper said. “As consumers’ media habits evolve, marketers need to consider all the screens when trying to reach their target audience. These benchmarks can help media planners/buyers and sellers better evaluate and optimize their reach online.” 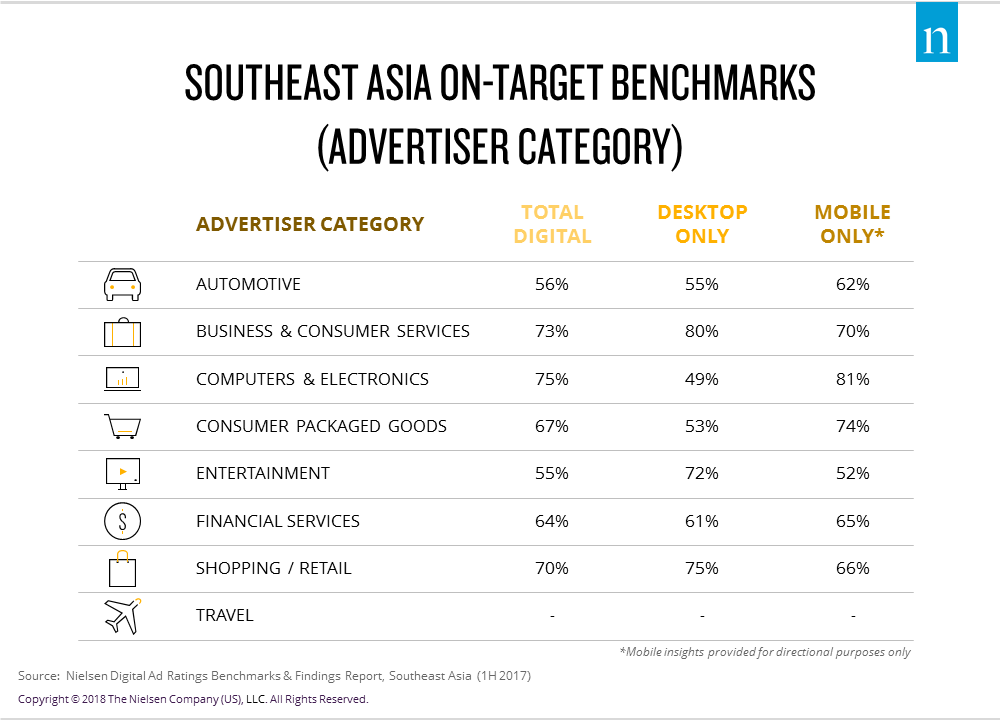 The report includes data from more than 3,000 Nielsen digital ad ratings campaigns from Indonesia, Malaysia, the Philippines, Singapore and Thailand measured until June 30, 2017, where the minimum number of site observations was at least 30.

A site observation is defined as the performance of a campaign on one site with at least 5,000 impressions with the specified demographic as the intended audience. With sample sizes exceeding 30, it can be reasonably expected to see stable benchmarks, the company said.