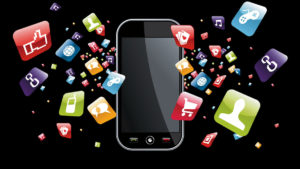 In 2018, mobile will surpass TV ad spending by more than $6 billion, according to our latest ad spending forecast by eMarketer. By 2020, the channel will represent 43% of total media ad spending in the US—a greater percentage than all traditional media combined.

“Even the strongholds of TV, such as live sports and news, are starting to move online, and people are consuming them on the go through mobile devices,” said Martín Utreras, vice president of forecasting at eMarketer. “Audiences continue to abandon traditional media, and ad dollars follow.” 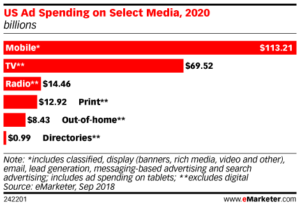 By the end of the forecasting period (2022), mobile ad spending is expected to more than double that of TV. The channel will make up $141.36 billion of US media ad spending, while TV will account for $68.13 billion.

“With respect to TV, content like news and sports are starting to move online,” Utreras said. “So we expect to see a shift in dollars for those categories as well. At the same time, we increased growth for mobile, as companies like Facebook and Google are still driving double-digit growth. Part of that is driven, of course, by digital video growth coming from platforms like YouTube and Facebook.”

Mobile ad spending to surpass all traditional media combined by 2020, according to eMarketer added by Newsroom on October 17, 2018
View all posts by Newsroom →