By Newsroom on March 29, 2017Comments Off on Legoland extends the park experience with educational, road-trip-friendly GPS for kids

Legoland has launched what it calls a location-based GPS adventure for kids in order to keep the whole car happy on road trips to Legoland in Winter Haven, Florida this spring and summer – and beyond.

The interactive theme park for kids developed the experience, Quest to Legoland, in conjunction with Google and marketing and ad agency VML.

Intended for children ages 7 to 13, users enter their departure date and departure place within the map-based experience and choose a Legoland Minifigure theme for their journey, such as Pirate, Kingdom, Adventure or Beach.

As parents drive, the selected Minifigure also moves in real time using GPS to identify nearby milestones where players can unlock games and new chapters of a story, the brand said in a video. There are challenges at each milestone – including villains to fight, mysteries to solve and races to race. Legoland said players must win each challenge to continue the story.

The Minifigure only moves when the player is moving in the car – and landmarks are pulled into the experience using the Google Maps API. This includes national parks and historic landmarks, as well as lakes, rivers, mountains and caves, a rep said. Related trivia and fun facts are triggered via the Google Maps API as well. 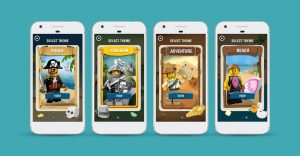 Players can also tap the Minifigure as they travel to see how much time remains until they’ll arrive.

What players see in the app depends on the route they take to the Florida resort. For instance, on a trip from Knoxville, Tennessee, details pop up about the towns the player drives through, such as, “This city’s nickname is ‘The City of Oaks,’” in Raleigh, North Carolina and, “Once the home of the famous pirate Blackbeard,” in Bath, North Carolina. It also highlights points of interest like the North Carolina State Capitol.

While it is not designed to give turn-by-turn directions, this is a GPS that uses GPS data to surface what’s nearby, along with related content.

What’s more, no matter how far away players begin – even if it’s a cross-country trip – they will see related content relative to where they are. In other words, the experience expands or contracts based on the player’s distance from the resort. Harsh Kapadia, creative director at VML, said VML has created content for each state in the continental US – and if players lose a signal along the way, the game goes into time-based mode and switches back and recognizes the new location once it has a signal again.

“We wanted to stay true to what GPS is for kids,” said Craig Elimeliah, managing director of creative technology at VML. “Doing something with smoke and mirrors wouldn’t be as special…we had to stay true to the dynamics and mechanics of GPS and put those constraints on it and make sure wherever they’re coming from, it’s a true GPS experience.” 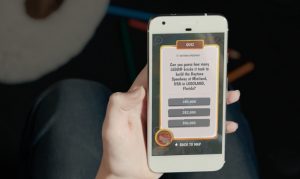 According to Elimeliah, the brand essentially redesigned the Google Maps GPS for kids.

“There are so many people who have done Google Maps skins and stuff, but we really wanted to do something different and special, so we contacted [Google’s creative think tank Zoo] and pitched the idea and they loved it to the point where they wanted to be a part of it,” Elimeliah said. “It was really amazing in terms of sharing engineers and subject matter expertise – everything we needed to know to make this as great an experience as possible. We really just locked arms and they put themselves fully behind this thing and we felt this was an amazing articulation to make this platform not just in conjunction with the brand, but a meaningful experience.”

It also marries the idea of the journey with Legoland Florida’s tagline, “Built for Kids.”

“The journey to Legoland from the closest airport is one and a half to two hours, so, no matter what, there’s a fair amount of time in the car and you always kind of cringe when you think about a long car ride and kids in the car,” Elimeliah said. “So the idea being around GPS for kids started germinating and we started batting the idea around and thought there was something there in which we could create a way for the brand to actually own the experience of traveling to the park itself and that experience becoming an extension of the park experience.”

Indeed, the game reinforces the park itself as the four Lego Minifigure guides are based on storylines that come out of roller coasters and all of the challenges in the game lead up to the final in-park experience, Kapadia said. 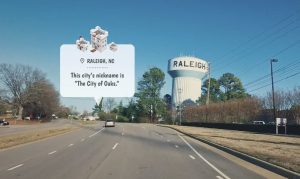 In addition, Kapadia said, a big focus for Legoland is cognitive learning.

“One of the things we notice right now is…back in the day, road trips used to be about learning,” Kapadia said. “Now it’s just to keep the kids shut in the back with an iPad or phone or whatever. [Their eyes are stuck on] a game. We did create a game, but what’s really different is when it comes to kids, this gets them to look up and look at their surroundings.”

And even if locations mentioned in the experience aren’t nearby per se, it still gives players an idea of where they are directionally in the context of wherever they happen to be.

“Not only [is] it a game where we get kids occupied, it’s a fun way to teach about different trivia you could learn,” Kapadia said. “Back in the day, I relied on Mom and Dad to tell me about places and historical landmarks. Today, if you asked me to pass down [that trivia] to my kids, it doesn’t translate because of all the distractions and reliance on looking [things] up on the Internet. We want to bring back old school learning, but mix it with a more modern approach. The GPS platform really allows us to bring that to life. We were very careful about not just making this another game where kids were glued to the screen and have no context.”

But the experience will also yield valuable data for Legoland.

“From a marketing perspective, we are interested in seeing how this mechanism could play into a possible CRM role for the brand, so understanding consumer behavior on the way to a destination – how they’re feeling…when they’re arriving, how to surprise and delight them upon arrival,” Elimeliah said. “Knowing who is using the app and where they’re coming from is not really explored as much in terms of the theme park space…and we feel like this is a product that will stand out. We anticipate copycats, but we feel good about being one of the first out of the gate to look at geolocation and augmented reality and we were able to create something truly for kids [that is] educational as well as utility-based…” 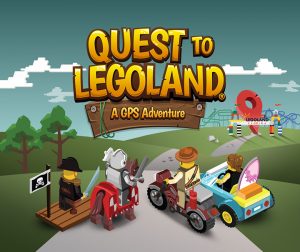 “Once we gather some data and look at it, when [we see] interesting insights and sort of journey behaviors, we can dial certain things up,” Elimeliah added.

He did not disclose how many times the experience has been downloaded to date.

Quest to Legoland is available from Google Play and the App Store.

“It really brings to life the ‘Built for Kids’ strategy,” Kapadia said. “It’s usually the parents that educate the kids, but the data we have flips it and brings the kids to take the lead. By the end of the experience, you see how much kids educate their parents. We take trivia for granted, but there’s so much stuff you don’t know – it’s a learning experience for both [kids and adults].”

Legoland Florida Resort is a 150-acre theme park designed for kids ages 2 to 12. It opened in 2015. A Legoland rep would not disclose how many visitors the park sees each year or how many come from out of state.

Legoland extends the park experience with educational, road-trip-friendly GPS for kids added by Newsroom on March 29, 2017
View all posts by Newsroom →