By Newsroom on July 18, 2016Comments Off on Facebook Adds More Refined Targeting for App-Install Ads 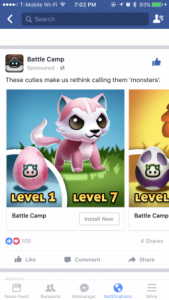 Much has been said in 2016 about the decline of apps, with reports saying that the boom in app downloads is declining, if not over. In May, the top 15 apps saw downloads decline 20% on average in the U.S., according to research from Nomura and SensorTower.

But as more and more people perform more actions on mobile, including shopping, app advertisers are as eager as ever to reach the right users, either for download or re-engagement. Now Facebook is hoping to help them with a new product, App Event Optimization, that’s designed to let marketers refine consumer targeting for app-install ads on Facebook, Instagram and Facebook’s Audience Network, which runs mobile ads across a variety of apps and mobile web properties.

App install ads have historically been served to a very broad audience with the goal of getting as many people as possible to download. But, said Jehan Damji, product manager at Facebook, “not all installs are created equal.” Some app advertisers may choose to target a broad audience if it’s a new app, but others want more specific targeting to boost downloads by people who seem more likely to make mobile purchases, said Mr. Damji.

After all, downloads rather famously fail to correlate with long-term use. One eMarketer study found that only 6% of people are still using a typical app 30 days after they download it, Mr. Damji said. “Apps have a retention problem,” he said. 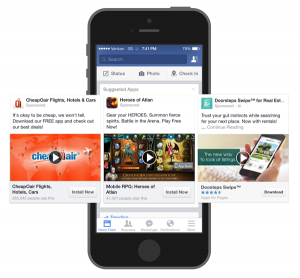 App Event Optimization will let app advertisers target people by bidding on one of 14 possible actions users have taken, like added an item to a shopping cart or a wishlist, initiated a checkout, purchased something, viewed content or unlocked an achievement.

“Because so many people engage with ads across Facebook, Instagram and the Audience Network, we’re uniquely able to determine whether a person is likely to take actions based on historical data and people with similar characteristics,” said Facebook in a blog post.

App marketers can only choose one action per ad, but there’s no limit to the number of ads that advertisers can run. So if an advertiser wants to target on more than one action, it would have to run different ads targeting the actions. Mr. Damji declined to comment on whether advertisers will be able to choose more than one action per ad in the future, but he said that Facebook is always looking at ways to evolve its products based on marketer needs.

Google in May announced a similar move, offering more specific targeting on its Universal App Campaigns to help advertisers reach people who have performed specific actions identified by the advertiser. That move let advertisers reach Android and iOS users who might have, say, booked a hotel, or made travel plans through other apps. 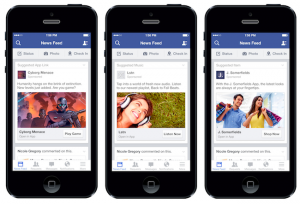 Facebook is also announcing two new ways for advertisers to market their apps: through Facebook’s Dynamic Ads and through its immersive ad unit, Canvas.

For Dynamic Ads, Facebook said in the blog post, “when people show interest in a particular product on a website, they will automatically be delivered an app install ad featuring that product, which they can then purchase directly after app install. This allows app advertisers to reach people who are already interested in their products and therefore, more likely to make in-app purchases.”

Canvas ads for app marketers can be used both for app-install ads and ads designed to re-engage consumers with apps they’ve used less over time. Canvas tends to be more animated and immersive than other ad units, and therefore allows advertisers to “bring their apps to life on mobile ads, showing more of the app and giving people a sneak peak into what they can expect,” Facebook said.