By Newsroom on July 30, 2018Comments Off on Domino’s Collaborates with Snapchat to Bring Pizzas in Augmented Reality 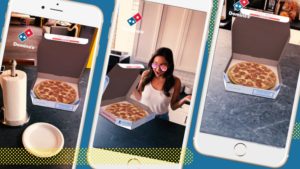 Domino’s is converting its pizza boxes and the pizzas into an augmented reality. The pizza chain has started running a national ad campaign that lets Snapchat users to play with the platform’s new “shoppable AR” lens.

This new feature is now available. It allows users to tap a button within Snapchat to quickly order a pizza without leaving the app. It works in two folds. When you open front camera and use the feature on your face, you will be wearing a pair of sunglasses, which reflect a pizza on your lenses. However, when the camera flips over, you will be able to see a floating Domino’s pizza box that opens to reveal a pizza.

Meenakshi Nagarajan, director of digital marketing at Domino’s, said in a statement about the campaign: “AR offers us a new way to bring consumers even closer to our product, We’re looking forward to continuing to test how AR on Snapchat is effective – not only for engagement, but for driving ROI.”

The campaign was created in partnership with the agency Kabaq. The agency visited a Domino’s location to shoot images of a pizza before converting the photos into an AR feature.

According to Snap, on daily basis 70 million people play with the AR lenses. Each person spends on average about three minutes with the feature.

Domino’s Collaborates with Snapchat to Bring Pizzas in Augmented Reality added by Newsroom on July 30, 2018
View all posts by Newsroom →