By Newsroom on January 15, 2018Comments Off on Dogology promotes digital dog training with AR out-of-home campaign 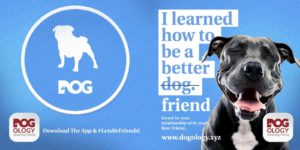 a campaign for Dogology, Inc., a New York city based virtual dog training startup, that showcases the ability to use augmented reality in out-of-home campaigns, along with out-of-home and mobile advertising creative developed by OUTFRONT’s in-house creative boutique, OUTFRONT Studios.

Between December 25, 2017 and January 12, 2018, OUTFRONT’s out-of-home displays and the OUTFRONT Mobile Network prompted consumers in New York and Atlanta to download Dogology’s mobile app on the company’s website. Once downloaded, the Dogology mobile app invited users to engage with nearby sidewalk art, billboard or subway creative, which prompted in-app augmented reality dogs to interact with users and lead them to Dogology’s website where they could learn about science-based dog or puppy training and book virtual training appointments with Dogology.

“Our dogs are our best friends, providing us with unconditional love through good days and bad. At Dogology, we want to help as many owners as possible strengthen that love by giving them the tools they need to understand and communicate more effectively with their dogs,” said Dogology CEO, Sarah Morse. “The out-of-home campaign was key to making this mission a reality. We were able to drive a lot of new users to our website and reach many dog owners that may not have learned about how our company could help them otherwise.”

combined mobile and out-of-home campaign ran in New York City on the subway, digital urban panels, and in Times Square, as well as in Atlanta’s northern suburbs with high density dog ownership. According to internal analytics provided by Dogology, this hybrid campaign drove an increase in direct website visits and sessions per user, mobile app downloads and augmented reality engagements, live chat sessions on the website and in the mobile app, as well as an increase in users who purchased virtual dog training from the company.

“OUTFRONT’s audience and location analytics enabled us to architect a hybrid campaign combining out-of-home and mobile that targeted specific audiences in New York and Atlanta for an innovative startup to directly impact the growth of the company,” said Jodi Senese, Chief Marketing Officer, OUTFRONT Media. “The augmented reality experience offered by Dogology enabled users to interact directly with the out-of-home ads and proved users will not only interact with out-of-home in unexpected ways, but also act on the experience when it’s well designed and interactive.”