Display ads continues to be largest driver of digital publisher revenue, according to AOP and Deloitte

By Newsroom on April 9, 2018Comments Off on Display ads continues to be largest driver of digital publisher revenue, according to AOP and Deloitte 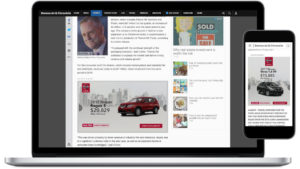 Publishers’ total digital revenue has increased by 5.6% on a 12-month rolling basis to December 2017, largely driven by display advertising, according to new research.

Findings from the latest Digital Publishers Revenue Index (DPRI), a quarterly report on UK publishing from the Association for Online Publishing (AOP) and Deloitte, reveals publishers experienced a 5.6% growth in total digital revenue in 2017 compared to 2016, rising to £365.5m. The increase was fuelled by a 27% annual revenue increase from display advertising.

According to the DPRI report, revenue from display advertising in 2017 increased to £189.2m from £148.9m. Subscriptions have also been a significant revenue stream for digital publishers during the period, having increased by 8% to £34m.

In the 12 months to December 2017, B2C publishers recorded positive revenue growth of 8.1%, while B2B publishers reported a decline of 6.5%. The decrease for B2B publishers is largely attributed to declines in revenue from sponsorship (-51%) and recruitment (-13%) during 2017. Despite this, B2B publishers saw an increase in subscription revenue of 15% year-on-year, which now accounts for 45% of their annual revenue.

Despite the good H2 revenue performance, confidence on financial prospects in Q4 2017 has experienced a decline from AOP board members at both a company and industry perspective.

Richard Reeves, Managing Director, AOP, commented: “Reviewing the changes in publisher revenue during 2017 shows some interesting trends. Digital revenue overall continues to increase, still driven by display advertising, but there is an ever-changing focus on alternative methods to generate income such as subscriptions.

“Meanwhile optimism across board members during the last quarter of 2017 has fallen from Q3, which is indicative of concern about the year ahead with GDPR being a key factor causing uncertainty. The challenge going forwards will be to maintain exceptional user experiences, while respecting and adhering to new regulations, so premium publishers can continue to create original, high quality content that sets them apart from other platforms.”

Dan Ison, lead partner for media and entertainment at Deloitte, commented: “Publishers generally ended 2017 on a positive note when compared to the previous year. Almost a third of respondents recording year-on-year growth of more than 25% in the final quarter of the year, which was double the share of respondents from Q4 2016. Significantly, total digital revenue for Q4 2017 was £102.3m, the first time that the £100m barrier for a quarter has been broken since our research began. The rise in subscriptions revenue is a further indication that consumers are increasingly willing to pay for online content, and digital publishers appear to have successfully adapted their business strategies in order to cater for current media consumption habits.”

Display ads continues to be largest driver of digital publisher revenue, according to AOP and Deloitte added by Newsroom on April 9, 2018
View all posts by Newsroom →