By Newsroom on June 25, 2018Comments Off on Big Bazaar engages consumers for Fifa World Cup with AR experience app on Facebook 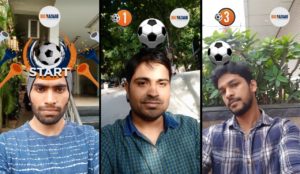 Facebook users can use the the camera on their mobile app and bounce the ball on their head. The activation is conceptualised by Bangalore based tech agency Alivenow.

Pawan Sarda, group head of digital, Future Group India said: “After cricket, India has a large number of football fans. Keeping in with the Fifa fever, with Big Bazaar AR Camera, all football fans can experience the game through augmented reality. It has been created keeping in mind that a football fan gets to enjoy the game in the real sense. At Big Bazaar, we wanted to engage with our customers during the Football World Cup and create a special experience for them.”