By Newsroom on December 20, 2017Comments Off on BBC Worldwide Americas Announces New Doctor Who Effect for Facebook Camera Effects Platform 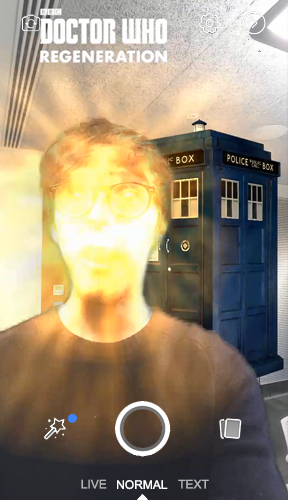 BBC Worldwide Americas announced a new effect for the Facebook Cameras Effects Platform giving users across the globe the ability to experience regeneration for the first time using Augmented Reality. Users can access the effect, created by VFX studio The Mill, through the Facebook app’s camera feature on December 19, 2017 – just days before the historic on-screen metamorphosis of Twelfth Doctor Peter Capaldi into Thirteenth Doctor Jodie Whittaker during the 2017 Christmas Special, Doctor Who: Twice Upon a Time.

Everyone using the effect will experience the excitement of a regeneration first-hand as they are enveloped in the distinctive golden glow that accompanies the unique process, which allows an alien Time Lord to change into a new body.

Users can be part of this iconic moment, that has accompanied each Doctor’s regeneration since the BBC series began in 1963. The Doctor Who camera effect is available worldwide and users can share their experience with friends via Facebook Stories, posting it on their Facebook page, or saving it to share elsewhere.

“Regeneration is the most distinct and fundamental attribute of Doctor Who. As we approach Christmas Day and the next monumental moment in the series’ history, it is a great pleasure to be able to bring fans the opportunity to create and share their own regenerative process through the Facebook Camera Effects Platform,” says Sergei Kuharsky, EVP Franchise and Digital Enterprises, BBC Worldwide Americas.

Doctor Who: Twice Upon a Time premieres on BBC One in the U.K., BBC AMERICA in the U.S., and Space in Canada on December 25. Audiences across Australia (ABC), Russia (Sony), Croatia (Pickbox), Germany (Maxdome & Videoload), Austria (UPC ), New Zealand (Prime) Middle East (BBC First), Asia (BBC Player), and Finland (YLE), will also be able to catch the Doctor Who Christmas special across broadcast channels.

This December, the BBC is hosting free screenings of this most eagerly-awaited festive TV show in selected cinemas across the North of England. The Doctor Who special will also be available in theatres across the U.S. on December 27, 2017– where the episode will be screened in over 400 cinemas through a partnership with Fathom Events.

Regenerate now with the new #DoctorWho Facebook camera effect. Try it out and share your regeneration with the universe: https://t.co/iAeKVL4sze 📸 ✨ pic.twitter.com/Bu4PprRmiF