By Newsroom on March 8, 2017Comments Off on Banner Ads Make Up More than 75% of Mobile Advertising in Asia-Pacific 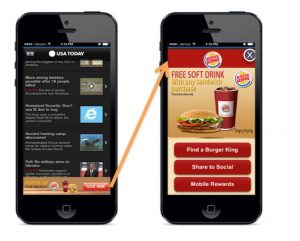 Have banner ads outlived their usefulness? Research has shown that mobile users skip over all types of display ads, banner ads included, without thinking very hard about them.

Unfortunately for digital advertisers in Asia-Pacific, banner ads account for the vast majority of mobile ads served to users, according to mobile analytics company Vpon. The firm found that more than three-quarters (77%) of the mobile advertising it tracked on its network in H2 2016 in Asia-Pacific was banner advertising. Native ads accounted for the second largest chunk, at 11%, followed closely by interstitials (10%). Video ads made up only 2% of mobile ads tracked by Vpon during the last half of 2016.

That might be bad news for digital advertisers. Mobile is already the medium through which the majority of digital advertising flows in the region. eMarketer estimates that mobile advertising will make up 64.2% of all digital ad spending in Asia-Pacific this year, a figure that translates to $55.7 billion. 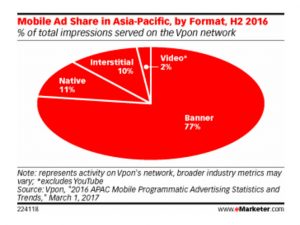 Banner ads served on mobile devices in Asia-Pacific may face another serious challenge in the form of ad blocking. According to PageFair, 94% of global mobile ad blocking usage occurred in Asia-Pacific in 2016, thanks largely to partnerships forged between smartphone manufacturers and browser developers. Many smartphones in the region ship with ad blocking software preinstalled as a result.

India, for example, has seen a very high rate of ad blocker adoption, with 59% of smartphones in the country running some kind of ad blocking browser, according to PageFair. The company found that, in total, there were 136 million desktop and mobile devices in India running ad blocking software in December 2016.

Advertisers in the region may do well to shift their attention away from the open web and toward native apps. Vpon also found that 51% of mobile display ad impressions it tracked in Asia-Pacific occurred on mobile apps in H2 2016, with 49% on the mobile web.

However, the split between the mobile web and apps varied significantly among individual markets. In the emerging market of Indonesia, just 9% of mobile ads were delivered on the mobile web, while the figure was 82% in Japan.

Banner Ads Make Up More than 75% of Mobile Advertising in Asia-Pacific added by Newsroom on March 8, 2017
View all posts by Newsroom →