By Newsroom on March 29, 2018Comments Off on Advertisers invest $63bn in programmatic buying but industry concerns loom large, according to WARC 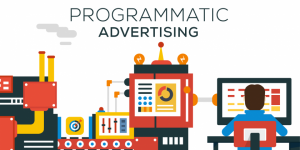 the international authority on advertising and media effectiveness, has released its latest monthly Global Ad Trends report, digesting up-to-date insights and evidenced thinking from the worldwide advertising industry. Threats to the digital advertising ecosystem is the focus of the latest report.

WARC estimates that $63.4bn was spent on programmatic advertising worldwide last year, but as little as $17.8bn (28%) may have actually made it to the ‘working media’ level.

Programmatic’s role in ad trade is increasing rapidly: two in every five dollars (39%) spent on advertising in the US last year – across all media and formats – were traded by machines. This rate has doubled over the last five years.

With a continued and rapid rise in digital advertising, concerns have surfaced within the industry. Over half of the senior marketers surveyed by the CMO Council cited social media risks and reputation management as a major issue. One in three highlighted ad fraud, ad misplacement, and viewability as concerns, while a quarter cited media buying transparency and accountability.

WARC provides the following evidence for each of their main concerns:

The World Federation of Advertisers (WFA) believe some 55% of investment goes towards what some have dubbed the ‘tech tax’ (the money spent on trading desks, demand side platforms, ad exchanges and data, targeting and verification services). WARC drew a consensus from media buyers, and while the rate of tech tax varied between markets, agencies and stacks, the outcome broadly aligned with the WFA estimates.

The tech tax would equate to $34.9bn. The true figure will be closer to $30bn, as platforms where the tech is integrated (such as YouTube’s Trueview) cloud the calculation.

After agency fees, of the $63.4bn in estimated programmatic advertiser spend last year, only $17.8bn made it to the ‘working media’ level when assuming a 30% fraud rate. 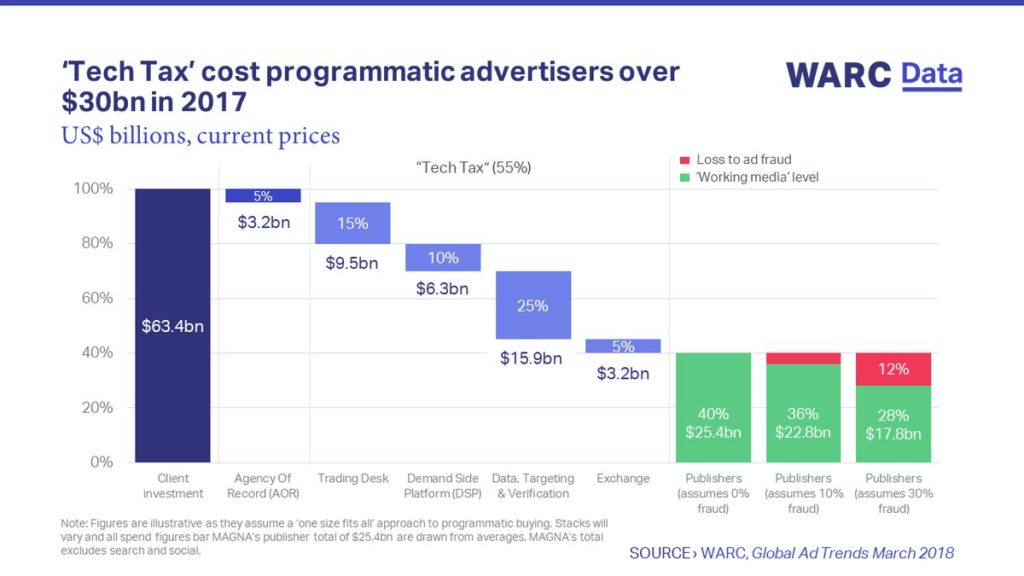 One in five (19.5%) consumers state that they would take some form of direct action against a brand if its advertising appeared alongside objectionable content, either by boycotting the brand (10.5%) or being vocal/raising issue (9.0%).

43% of senior marketers claim that they have already had reputation problems after ads had appeared next to objectionable content. Almost two in five (37%) have pulled or intend to pull ads as a result.

Ad misplacement – the risk of a legitimate ad appearing on an undesirable site or next to objectionable content – varies significantly by market, format, and buy type. The average risk for desktop display ads across 11 key markets was 6.9%.

The issue is particularly prevalent in the Americas. One in ten (10.2%) desktop impressions in Brazil were flagged on moderate to very high-risk inventory, followed by the US (9.4%) and Canada (8.4%). The risk was lowest in Singapore (3.4%).

Data for the second half of 2017 show that brand risk is routinely higher when the ad is bought programmatically. This is particularly true for video ads.

Ad fraud: Most ads are not optimised against fraud and remain vulnerable. One in three clicks on programmatic ads is fraudulent

The Association of National Advertisers (ANA) estimates that around $6.5bn was lost to ad fraud worldwide last year. Total losses could have been cut to $700m if the entire industry had adhered to safety guidelines.

Viewability: Almost half of programmatic ads do not meet Media Rating Council standard. Only one in four viewable desktop ads is actually seen

Programmatically purchased ads routinely under-perform in terms of viewability when assessed against the Media Ratings Council standard. On average, almost half (46%) of programmatic ads are not viewable.

Even if the ad is viewable, it is unlikely to be seen. Data show that only one in four (23%) of the desktop display ads defined as viewable by the Media Rating Council (MRC) standard are actually viewed, with only 4% of measured ads seen for more than one second.

10% of Facebook’s 2bn monthly users are duplicate accounts, according to company reports. The number of fake accounts is estimated to be between 2-3% by Facebook, suggesting that as many as 265m accounts could be worthless to advertisers.

Separate research shows that, on average, 16.4% of the followers on Instagram’s top 20 accounts are fraudulent and as many as 15% (49m) of Twitter’s users don’t have an offline identity.

Summing up, James McDonald, Data Editor, WARC, says: “The boom in programmatic advertising over recent years has exposed major flaws in the ecosystem, including heightened brand risk, impression and click fraud, and poor viewability and dwell time. This has led advertisers – who collectively paid $30bn to ‘middlemen’ in the online ad supply chain last year – to reassess the way they invest and keep pressure on the industry to clean up its act.”

• 46% of programmatic ads do not meet Media Ratings Council standard

• 55% rate of ‘tech tax’ within the programmatic chain

Advertisers invest $63bn in programmatic buying but industry concerns loom large, according to WARC added by Newsroom on March 29, 2018
View all posts by Newsroom →