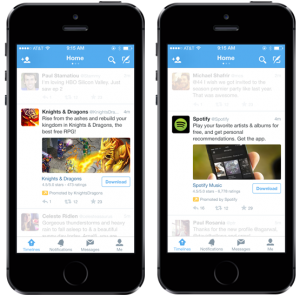 Facebook is not the only social media platform that’s seeing great results for mobile advertising revenue.

Rival Twitter recently announced that a majority of its total advertising revenue came from mobile in the last quarter.

Despite Twitter’s overall revenue of $602 million missing analyst expectations for Q2 2016, ad revenue was up 18% at $535 million. Shares tumbled 9% after results were announced.

Mobile advertising revenue on Twitter accounted for 89% of total ad revenue. That’s $476.15 million for mobile, proving that brands and advertisers are increasingly turning to the format and are now investing more of their spending into mobile.

Monthly active users totalled 313 million on Twitter, up 3% from the year over.

In a trading’s post, the company said that advertising demand was in line with expectations. However, the firm acknowledged that it had some work to do to win bigger marketing budgets. Premium mobile video could be one such avenue for Twitter.

89% of its advertising revenue is coming from mobile, says Twitter added by Newsroom on August 1, 2016
View all posts by Newsroom →