By Newsroom on April 6, 2017Comments Off on YouTube’s Live TV Streaming Service Is Officially Available for Subscription

YouTube’s answer to a live TV streaming service is available for download in the US and will start streaming on April 6, 2017.

The service will available in the New York, Los Angeles, San Francisco Bay Area, Chicago and Philadelphia markets at launch with others on the way.

At $35 per month, YouTube TV will include ABC, CBS, Fox, NBC, ESPN, Fox Sports Network and Comcast SportsNet, among many others. Among the offerings from the networks that are included are live sports from the NBA, MLB, NFL and the NCAA. This makes YouTube TV the most robust streaming package for sports fans without any additional add-ons or bonus subscription packages. 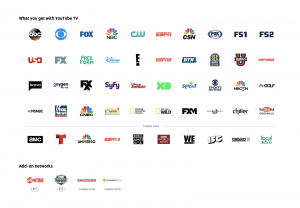 “Given the growing number of cord cutters and cord-nevers, particularly when we talk about younger fans, streaming live sporting events is no longer a novelty but a necessity,” said sports business analyst Kristi Dosh. “However, don’t count traditional providers out either, because there are still plenty of sports fans who haven’t embraced smart TVs and streaming devices and expect to find their favourite live sports on their favorite cable or satellite provider.”

More networks will soon be added to YouTube TV at no extra cost, including AMC, BBC America, IFC, Sundance TV, WE tv and BBC World News.

For an additional monthly fee, subscribers can add Showtime and Fox Soccer Plus, with Shudder and Sundance Now launching soon. 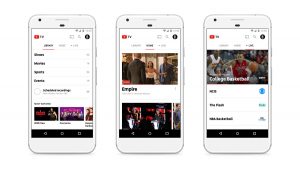 At launch, YouTube TV will be available for streaming via Google Chromecast or Chromecast built-in TVs, as well as Android and iOS devices. Subscribers can access their unlimited cloud DVR storage systems for recording and watching live TV later from any device.

Each YouTube TV subscription comes with six accounts that get unique recommendations and personal cloud DVR storage and the ability to watch up to three streams at a time. Subscribers also get access to YouTube Red original series and movies within the YouTube TV app.

YouTube TV comes with a 30-day free trial and the ability to cancel at any time without penalties.

YouTube’s Live TV Streaming Service Is Officially Available for Subscription added by Newsroom on April 6, 2017
View all posts by Newsroom →