By Newsroom on July 11, 2017Comments Off on Verto Analytics: Growth of personal assistant apps ‘spotty and sluggish’ 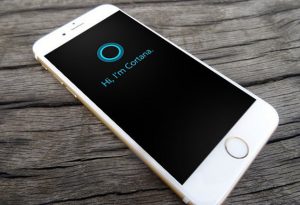 The use of personal assistant apps on smartphones is showing stagnation and even a decrease in certain cases, partly as people start to use standalone home devices such as Amazon’s Echo and Google Home instead of their mobiles to complete everyday internet tasks.

Consumer-centric measurement firm Verto Analytics monitored a panel of US adults who use personal assistant (PA) apps on their mobile over the course of a year and found no increase in the numbers using them. In May 2017, 71 million or 44% of US adult smartphone owners used a PA app – the same as in May 2016 – but usage has been steadily declining since it hit a peak of around 88 million people in November 2016.

In addition to stagnating popularity, the time spent using them has more than halved from 28 minutes a month to just over 12.

Although Siri remains the most popular PA smartphone app, the number of monthly users fell 15% over the year to 7.3 million, while its “stickiness” level (average daily users as a percentage of total monthly users) dropped by nearly half – from 21% to 11%.

In contrast, Amazon’s Alexa saw a 325% year-on-year increase in monthly unique users (from 0.8 million to 2.8 million) and more than doubled its stickiness rating, from 10% to 22%. Microsoft’s Cortana also saw a significant jump in usage – a 350% increase in users (to 0.7 millions) and stickiness tripling (to 60%).

The study also revealed that the PA smartphone app user-base skews towards older women, a demographic that traditionally falls outside of the expected early-adopter niche. In fact, the “superuser” – someone who spends over twice as much time as the average person – is a 52-year old female. They spend 1.5 hours per month on PA apps compared to the 12 minute average.

“Despite all the hype, the take-up of personal assistant apps is spotty and sluggish and has yet to gain a sturdy mass-market foothold,” said Hannu Verkasalo, CEO of Verto Analytics. “It’s likely that some of this behaviour is shifting to standalone devices such as Google Home and Amazon Echo as people prefer using those when at home. 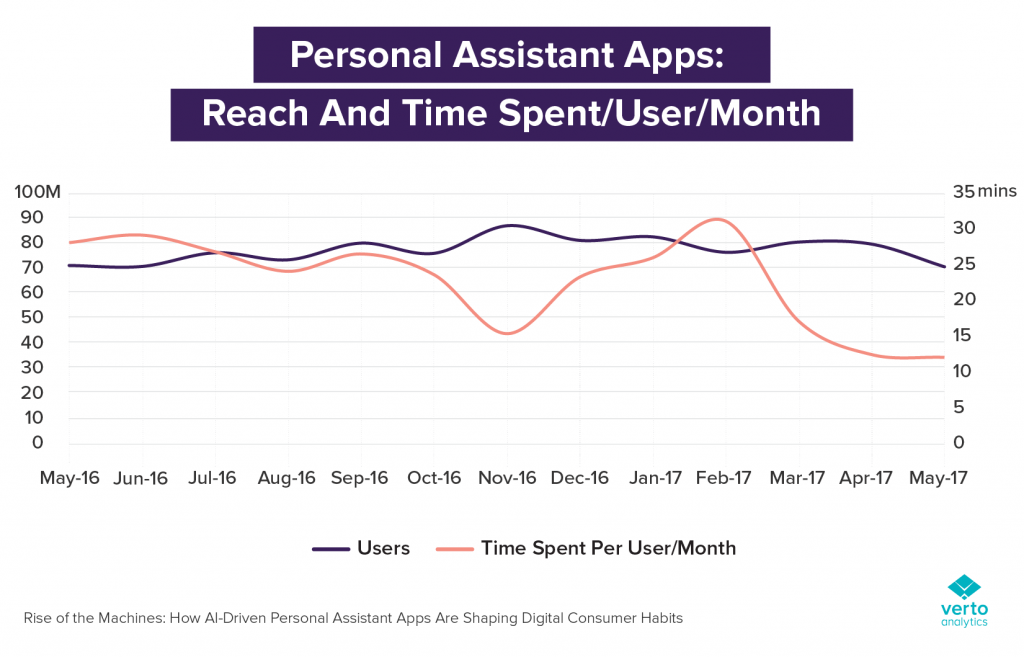 “Whatever the reason, it’s a reminder that usage of AI-driven apps and services is in its infancy as consumers are still exploring how to use them as replacements for search and other familiar online activities. As the technologies and user experience design will develop significantly, it’s not going to be clear for a while the best way for companies to exploit this area.”

There is one exception to the stagnating use of PA apps – navigation and maps. Verkasalo notes that analysing the apps people use immediately before and after a PA app suggests consumers are “mainly using them for navigation, such as finding a route or location via Google Maps, and for accessing entertainment at home, as evidenced by the presence of apps such as Netflix and YouTube.”

The study also revealed the use of PA apps has distinct peaks, at 10am and 1pm, and experiences a steady climb from 2pm-7pm, before dropping off in the evening, reinforcing the idea they switch to the home-based standalone devices.

The report, “Rise of the Machines: How AI-Driven Personal Assistant Apps Are Shaping Digital Consumer Habits” is available here.

Verto Analytics: Growth of personal assistant apps ‘spotty and sluggish’ added by Newsroom on July 11, 2017
View all posts by Newsroom →