By Newsroom on July 27, 2017Comments Off on UK advertising spend starts 2017 in growth according to Advertising Association/WARC Expenditure Report 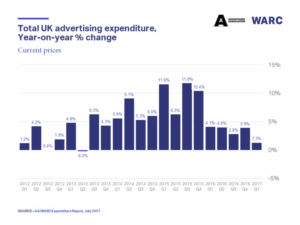 Overall market growth occurred despite a drop of -6.2% in total television advertising, its steepest fall since 2009. However, TV ad expenditure is forecast to recover in 2018 with 2.5% growth.

Digital formats performed well across the board, up 25.4% for national newsbrands, 8.1% for radio, 7.2% for broadcaster video-on-demand and 27.6% for out-of-home. Cinema recorded an outstanding quarter, growing 27.6% year-on-year in Q1.

Ad spend growth continues to be driven by internet (+10.1% year-on-year), which includes digital revenues for newsbrands, magazine brands, TV and radio broadcasters. Within this, spend on mobile formats (+36.2%) was particularly strong during the first quarter. One in four pounds spent on advertising in the UK now goes towards search.

Stephen Woodford, Chief Executive at the Advertising Association said: “As business sentiment suffers, it’s no surprise to see ad-spend come under pressure – but the market overall remains resilient. Beyond these numbers, our sector is a huge source of inward investment and exports and should be a priority for Government as we focus on business beyond Brexit.”

James McDonald, Senior Data Analyst at WARC commented: “The latest data show that large retailers – particularly supermarkets – and major food brands reined in their TV spending by 25% during the first three months of 2017, instead committing to cutting prices on the shelves as household expenditure wanes. Higher inflation and slow wage growth has put a squeeze on consumer spending, while business confidence has weakened following the unexpected and indecisive general election result in May. These underlying stresses have resulted in a downgrade to our full-year expectations for UK ad market growth, almost all of which will come from digital formats.”

The Advertising Association/WARC Expenditure Report is the definitive measure of advertising activity in the UK. It is the only source that uses advertising expenditure gathered from across the entire media landscape, rather than relying on estimated or modelled data.

The full year outlook for 2017 has been downgraded by -0.5pp to 2% growth, but is forecast to recover by 2018 at 2.6% growth, driven by the men’s football World Cup and a likely improvement in certainty around the terms of Brexit. 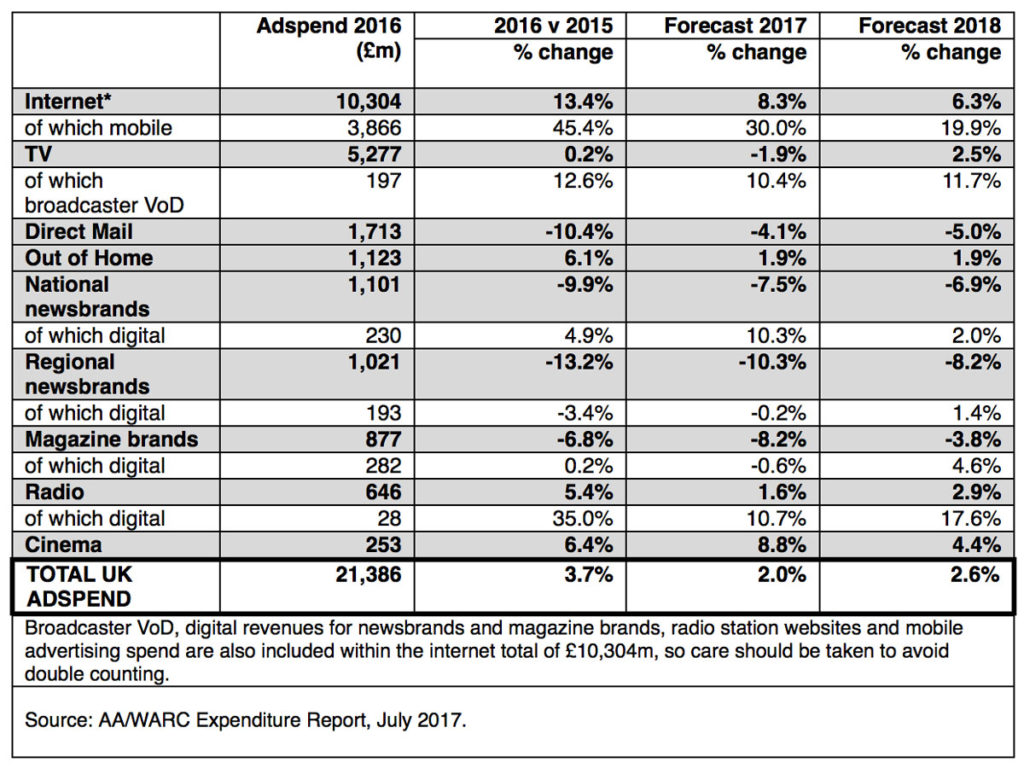 UK advertising spend starts 2017 in growth according to Advertising Association/WARC Expenditure Report added by Newsroom on July 27, 2017
View all posts by Newsroom →