By Newsroom on February 27, 2018Comments Off on U.S. wireless carriers plan to launch 5G with hotspots, not phones 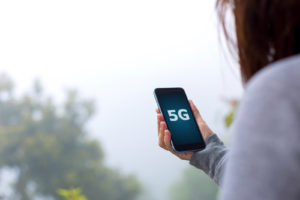 have conceded that phones won’t be available in time for the launch of fifth-generation mobile service this year, and plan instead to offer 5G through portable hotspots called pucks.

“I would expect that there are a range of handsets available in 2019 and some of those will be in the first half of 2019,” Verizon’s wireless chief, Ronan Dunne, said in an interview at the Mobile World Congress in Barcelona. “If there’s anything available in 2018, it’s more likely to be a hotspot.”

In a race to be first with technology that will let cars drive themselves and robots perform surgery, the wireless service providers have announced ambitious timelines on the launch of 5G. Sticking with the plan even if phones aren’t ready highlights how none of the carriers wants to be left behind in what’s expected to be a whole new round of revenue from the sale of advanced-network services.

Equipment makers like Ericsson and Nokia are eagerly developing 5G gear to cash in on the building boom. But new networks will need new phones, and that’s where the race hits hurdles.

Among the first crop of 5G phones will be handsets from China-based manufacturers like Huawei, Xiaomi and ZTE. Both Huawei and ZTE face a roadblock in the U.S. amid concerns the companies possible ties to the Chinese government could pose a security risk. ZTE says it will have a 5G phone available as early as year-end. Verizon and AT&T both dropped plans to carry Huawei phones.

Randall Stephenson, AT&T’s chief executive officer, introduced the idea of the puck during the company’s earnings call last month. A puck is a portable antenna that allows a user to connect a mobile device to the new super-fast wireless network.

“The thing that’s going to cause 5G to go slow, more than anything else, is just availability of handsets,” he said. “That’s why we’re going to be deploying pucks in the first part of our deployment.”

U.S. wireless carriers plan to launch 5G with hotspots, not phones added by Newsroom on February 27, 2018
View all posts by Newsroom →