By Newsroom on April 5, 2018Comments Off on Tinder signs multi-year partnership with Manchester City

have agreed a new multi-year partnership with Tinder, the world’s most popular app for meeting new people.

A giant City-branded blimp soared over Manchester to mark the beginning of the relationship, whilst Tinder will also switch its colours across its social platforms to sky blue as they show their support for Pep Guardiola’s men in the build up to the upcoming Manchester derby.

The partnership, which is Tinder’s first significant foray into the world of sport, incorporates the club’s men and women’s first teams as well as City Football Group sister club, New York City FC.

App users and football fans from around the world will benefit from a range of exciting and unique fan engagement activities, such as exclusive access to games, once-in-a-lifetime opportunities and stadium events.

“Tinder is a huge global platform which, just like football, is bringing millions of people together every day all around the world,” said Tom Glick, City Football Group’s Chief Commercial Officer. “Football is all about a community of fans, sharing moments, emotions and passion for the sport they love. Together with Tinder, we have a great opportunity to explore how we can combine Tinder’s significant appeal and reach with our global audience to create even more relationships in a new, fun and creative way. We believe this will be a perfect match for Tinder and for City.” 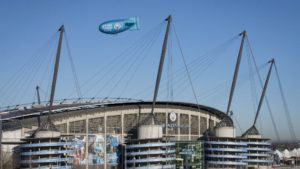 operates in nearly 200 countries, across more than 40 different languages, with millions of people using its app every day and has now turned to football and City’s hundreds of millions of followers, to help connect even more people with their passion.

The launch of the City-branded blimp followed wide speculation after photos of a red Tinder-branded blimp taking off alluded to the fact that the they were swiping right for Manchester, without revealing details of the partnership.

David Wyler, Tinder’s VP Partnerships, added: “Tinder’s global presence and highly engaged user base gives us a unique understanding of what people all over the world are passionate about. And they’ve made it clear that they have a love for sports, particularly football. Football is a sport where anything can happen at any moment. We wanted to be true to the game and do something unexpected by surprising the fans and our users with news of our partnership in a fun and creative way.”