The BBC is launching its first AR app, designed to turn your living room into a museum

By Newsroom on February 7, 2018Comments Off on The BBC is launching its first AR app, designed to turn your living room into a museum 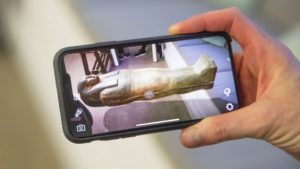 BBC is partnering with leading museums to bring a range of historical artefacts to audiences and Licence Fee payers via a new augmented reality app.

Developed by BBC Research & Development and Nexus Studios, the app supports the broadcaster’s new landmark arts and culture series, Civilisations, in which it’s teamed up with more than 30 museums from across the UK.

Major themes from the new Civilisations series will be incorporated into the app, allowing people to view, explore and discover the artefacts like never before.

Users will be able to uncover annotations, audio and imagery that enrich the story of each exhibit, and see inside or through many objects, such as seeing through a sarcophagus to the mummy within, thanks to an ‘X-ray’ feature.

BBC R&D is also making a range of in-house and third party digital tools available to Civilisations Festival partners to help them find new ways of telling stories, to develop their in-house digital skills and to provide them with a digital legacy following the festival’s conclusion. 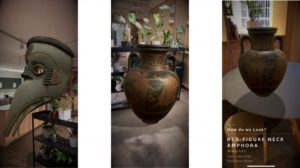 executive product manager for BBC R&D, said: “The Civilisations Festival has opened BBC R&D up in a brand new way.

“Not only has it brought innovative digital tools and skills to hundreds of museums, galleries, libraries, archives and other arts organisations from all over the UK, it has enabled us to trial our ideas and technologies on a huge scale which is going to influence and inform our work over the coming months and years.

“The work we’ve done with these organisations will enable fans of the series new ways to engage with art and cultural artefacts from across the country.

“The BBC’s first ever AR app is a great example of this, offering users the ability to explore a personal, virtual exhibition of fascinating pieces whenever and wherever they want.”

The app will be available for iOS and Android from the beginning of the new series.

The BBC is launching its first AR app, designed to turn your living room into a museum added by Newsroom on February 7, 2018
View all posts by Newsroom →