By Newsroom on February 8, 2017Comments Off on Singular: Facebook Overtakes Google Mobile Ad Network In ROI 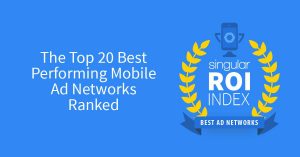 Facebook’s mobile ad network emerged as the top-performing advertising network during the second part of 2016, giving marketers running campaigns on Android devices a higher return on investment (ROI) compared with Google AdWords, according to a study released on February 7.

San Francisco-based Singular, which focuses on mobile analytics, published the study — The Mobile ROI Index — which ranks advertising networks for Android and iOS mobile devices based on the ROI generated for campaigns.

The ROI for marketers might take a backseat to Google’s profits as the company pushes more strongly toward mobile advertising.

“This is the first time Facebook overtook AdWords on the Android platform,” said Susan Kuo, co-founder of Singular. “Until now, Android has been seen as the mothership platform for AdWords.”

Kuo declined to elaborate on her thesis as to explaining the shift, but said the company analysts are digging deeper into the data to determine the cause. “We want a little more time to comb through the data,” she said.

The Mobile Power ROI Index used conversion and cost data — anonymously collected from more than 1,500 apps owned by Singular customers to rank the top-performing ad networks on iOS and Android.

The index aims to provide marketers with greater transparency into mobile advertising by highlighting the ad networks that are driving the most revenue into mobile apps at the lowest cost. The score also factors in market adoption as measured by the total ad spend it attracts.

Singular’s study found the average cost of running ads across AdWords to be roughly the same as other leading networks on iOS, although the average revenue from users acquired through AdWords was comparatively lower. The discrepancy between the amount that iOS advertisers spend on AdWords and the revenue those dollars typically drive suggests “a market correction” on the horizon, per the findings.

Users are about 1.65-times less expensive to acquire through Android ads compared with iOS ads. Yet iOS ads drive 1.3 times higher ROI than Android ads, which means that for each dollar a marketer spends to acquire a user on iOS, they can expect to get back 1.3 times more revenue than if they had spent that dollar on Android, per the findings.

The report also names the Fyber, Motive Interactive, and Mobvista advertising networks among the fastest-growing.