By Newsroom on May 26, 2018Comments Off on Regal’s ‘Avengers’ AR activation saw 2M users on opening weekend 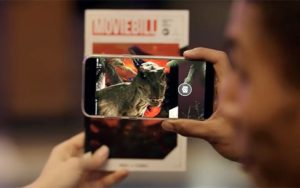 Moviebill was distributed to 1 million moviegoers on the opening weekend. According to Matthew Shreder and James Andrew Felts, cofounders of Moviebill, the magazine has recorded 2 million scans since then and sold out at theaters within 48 hours.

Shreder and Felts have worked together in film for a decade. They’ve been working with Regal to learn how to target theater audiences.

“Moviegoers are some of the most valuable consumers out there. They’re willing to drive to the theater, turn off their phones and pay a premium price to see a movie,” Shreder told Publisher’s Daily. “Their consumer behaviors make them incredibly valuable.”

The company likens the pub’s initial print run to Entertainment Weekly, which reaches 1.5 million, and Vanity Fair at 1.2 million, per Regal.

According to Shreder and Felts, the scans represent the highest reader engagement with augmented reality in a print magazine to date.

collectible magazine features 28 full-color pages all tied to “The Avengers,” with each featuring fully-integrated augmented reality technology. Using the Regal mobile app — which has 9 million users — readers can scan each page and access exclusive content, including videos, editorial and three-dimensional characters.

The Regal app was the top trending app in the Apple app store over the weekend of Moviebill’s release. Readers spent an average of four minutes on a page with a 10% click-through rate across all activations. Two weeks after its distribution, the magazine was still receiving scans from readers. Total impressions from the campaign came in at 56,000,000 across all marketing with 16,507,333 from social media.

What makes these numbers significant, according to the founders, is the ability to connect advertisers with a consumer audience that is guaranteed to engage with the product.

While a brand may pay millions for a tie-in to a popular movie like “The Avengers,” a product like Moviebill takes the advertisers directly to a concentrated group for a fraction of the cost.

Moviebill is producing tie-in publications for summer blockbusters, such as “Jurassic World: Fallen Kingdom” and “Mission: Impossible – Fallout” with a run of eight issues expected this year.

Regal’s ‘Avengers’ AR activation saw 2M users on opening weekend added by Newsroom on May 26, 2018
View all posts by Newsroom →