Netflix to ramp up programmatic spend, but has no plans to moves into sport

By Newsroom on April 18, 2017Comments Off on Netflix to ramp up programmatic spend, but has no plans to moves into sport 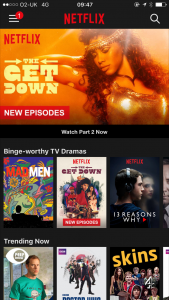 The company generated revenues of $2.64bn (£2.1bn) in Q1 and in a letter to shareholders, said it would spend $1bn on marketing in 2017 to drive member acquisition, including increased investment in programmatic advertising “with the aim of improving our ability to do individualized marketing at scale and to deliver the right ad to the right person at the right time.”

The company also said it had no plans to follow Amazon’s move into covering NFL football. “That is not a strategy that we think is smart for us since we believe we can earn more viewing and satisfaction from spending that money on movies and TV shows,” the company said.

Netflix to ramp up programmatic spend, but has no plans to moves into sport added by Newsroom on April 18, 2017
View all posts by Newsroom →