By Newsroom on August 10, 2018Comments Off on L’Oreal is bringing its ‘try before you buy’ AR tech to Facebook

L’Oréal has been investing heavily in augmented reality (AR) over the past year, and now its teaming up with Facebook to bring scale to its efforts.

The Urban Decay owner is now L’Oréal has been investing heavily in augmented reality (AR) over the past year, and now its teaming up with Facebook to bring scale to its efforts.

L’Oréal is now among the first brands to commit to experimenting with Facebook’s new AR ad formats. The company has just inked a “long-term” deal with the social network to collaborate on AR projects for brands like L’Oréal Paris, Lancôme, Giorgio Armani, and Yves Saint Laurent.

The first initiative L’Oréal is trialing as part of this will see it run a campaign in the newsfeed for its NYX Professional Makeup brand. ​

The ads let users ‘try on’ cosmetics and click to purchase without leaving Facebook. The push is being powered by the cosmetic firm’s freshly acquired Modiface technology.

For now, the collaboration is purely a tech partnership (rather than a commercial one). But, if anything it signals that L’Oréal is getting serious about AR. 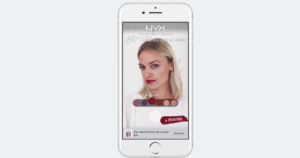 “Facebook and L’Oréal share the vision that AR is becoming key for product and brand discovery and purchase,” said Lubomira Rochet, L’Oréal’s chief digital officer. “We are at that magical moment when technologies have matured enough and consumer appetite for using them is growing everywhere. We are very excited about that new step in our long-term partnership with Facebook. One fascinating aspect of this partnership is that it keeps us innovating the beauty user experience. After having adapted our creatives and contents to a mobile-first world it will be very interesting to see how AR is going to change the creative playbook of our industry.”

In June, it unveiled its own Facetime-style proposition that essentially brings the experience of visiting a makeup counter to consumers’ phones and iPads, letting them try on lipstick, eyeshadows and more before they buy. Like the Facebook ads, the feature was initially trialed by NYX.

It works by giving customers the chance to connect with beauty professionals via a face-to-face call that is made within the NYX app. These makeup artists then offer advice and styling tips via the one-on-one service.

L’Oréal rival Coty has also been doubling down on AR experiences. It was one of the first brands to invest in Snapchat’s shoppable-AR and recently unveiled its own AR mirror.

L’Oreal is bringing its ‘try before you buy’ AR tech to Facebook added by Newsroom on August 10, 2018
View all posts by Newsroom →