By Newsroom on June 7, 2018Comments Off on Jurassic World comes alive in the UK via an AR game

Bringing the virtual world into the real world is rapidly growing in popularity with the global market predicted to be worth approximately £100 billion by 2021. Augmented Reality (AR) is undoubtedly one of the most exciting technological innovations around and games like Pokémon GO have inspired more developments in this sector.

Recently Jurassic World Alive was released in the UK and brings monster hunting to a whole new level. Instead of searching for cute creatures, players are tasked with saving dinosaurs from extinction by collecting DNA samples and creating new hybrid species in a lab. The game, developed for both android and IOS, is loosely based on Pokémon Go and only time will tell if it will have the same global success.

Will Jurassic World Alive Become The Most Downloaded App? 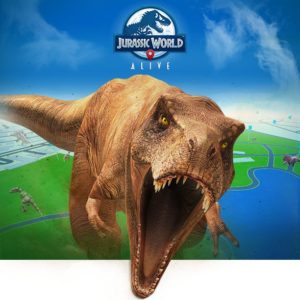 A recent survey conducted by mobile app agency, The App Developers showed that Social Media & Communications Apps are the most popular type of app downloaded (31%), with entertainment apps (Games, Streaming & Music Apps) are not far behind (27%). However, when looking at the top grossing mobile apps in the UK, 8 out of the top ten apps are games.

Jurassic World Alive is free to download, but does contain in-app-purchases. The survey found that this was a good approach as 74% only download free apps with 68% saying they don’t make in-app purchases. Jurassic World Alive, like many gaming apps, offers ways of getting around making in-app purchases and the survey found that 38% would watch “unskippable” ads and 33% would answer survey questions to continue playing for free.

34% of app users are 18 – 34, and since the release of Pokémon GO by Niantic, AR technology has become more popular. Other franchises have picked up on Niantic’s success and Jurassic Park Alive produced by Ludia, is only the second game to join this trend. Many more AR games are predicated to be released into the marketplace, such as Harry Potter: Wizards Unite, and the App Developers could see this happening.

The App Developers, explain: “Both VR and AR technology have been around for a while now; but have still not really exploded into the public consciousness. 2018 and the next couple of years are expected to see a big change in this. Part of the problem with VR has been the low number of quality apps being developed, but this is now turning into a huge growth market. Particularly now developers and businesses are starting to see the potential.”

Jurassic World comes alive in the UK via an AR game added by Newsroom on June 7, 2018
View all posts by Newsroom →