By Newsroom on August 4, 2017Comments Off on J. Walter Thompson Brings 19 Crimes’ Wine Bottles to Life via a New Immersive AR App

The easy-to-use technology brings the torrid stories of each bottle to life by animating the labels’ photographs and prompting characters to give unique monologues.

Led by principal Creative Technologist Peter Oberdorfer, Tactic’s AR specialists, known for Jose Cuervo’s “History in a Bottle” AR app, managed most facets of the experiential project from casting and voice overs to programming, creating digital assets and crafting 3D versions of the characters that become animated and speak aloud with the app’s technology. 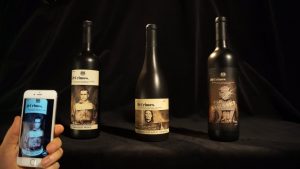 “We worked with J. Walter Thompson and the 19 Crimes team to bring these historical characters to life, and create a new way for fans of the wine to engage with the brand,” Oberdorfer says.

The persona-driven wine brand is inspired by the true tales of British criminals accused of 19 specific crimes, which starting in the late 1700s were punishable by “transportation” or relocation to the new penal colony known as Australia. The offences ranged from “theft above the amount of one shilling” to “stealing fish from a pond or a river.”  Each bottle displays the mugshot of an actual person sentenced to make the treacherous trek to the unknown land.

The 19 Crimes app can be downloaded for free from the app store. Once loaded, viewers will experience an easy user interface that guides them in seeing the characters on the bottles come to life.