By Newsroom on June 7, 2018Comments Off on iPrice Group analyses the increased online shopping consumption during the month of Ramadan 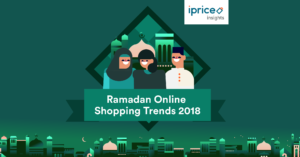 Just a few weeks into Ramadan, online shopping consumption increased greatly during the fasting month. This was evident as iPrice Group, a price aggregator platform for hundreds of online merchants in Indonesia and Malaysia experienced double-digits growth in online sessions. Undertaking this study, there are unique consumer insights that only occurs during the month of Ramadan.

Online Shopping at the Wee Hours of the Morning

While many Malaysians and Indonesians are awake in the wee hours of the morning for Sahur (pre-dawn meal), they are more likely to shop online as well. Analysis suggests that online traffic at 5:00am increased by 105% in Malaysia and 345% in Indonesia when compared to the same time prior Ramadan. The increase was much higher in Indonesia as the country has the largest Muslim population in the world. This is a continuous trend as seen in our study last year in both Malaysia and Indonesia. 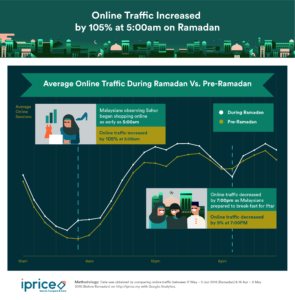 Fashion products are among the most sought-after items during Ramadan as millions of Malaysians and Indonesians prepare for the Hari Raya Aidilfitri celebrations. Using Google Trends, we saw that keywords such as “Baju Raya” and “Baju Raya 2018” was among the most popular keywords associated with “Raya” (which is closely associated with the Aidilfitri celebrations) in Malaysia. 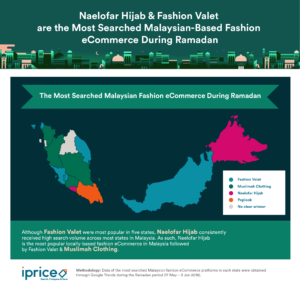 In the country, local brands have been actively showcasing their 2018 Raya collection and deals through various advertising, social media and marketing campaigns across the country. The three most searched local fashion eCommerce brands in Malaysia during Ramadan were Naelofar Hijab, Fashion Valet and Muslimah Clothing.

Towards the end of May 2018, Naelofar Hijab launched the “Shine On” collection which is their #naelofaraya2018 campaign. At this same period, Naelofar Hijab garnered a high volume of search interest between 23 – 30 May2018 indicating a successful campaign that caught the attention of many Malaysians.

Close in fourth place was Siti Khadijah which garnered a high volume of search interest from Malaysians as well. Siti Khadijah specialises in prayer outfits specifically for women known as telekung. As such, the high level of interest for the eCommerce was no coincidence because many women are dedicating their time to pray during Ramadan.

In Indonesia, there was high search volume for “gamis” which is a long dress worn by Muslim women along with keywords such as “hijab” and “baju muslim”. These keywords indicate that many Indonesians were looking for inspiration or sources for clothing suitable for their religion activities during the month of Ramadan. In addition to this, there was a high level of interest for “Baju Koko”, which is a fashionable traditional top for men most popularly worn during the Aidilfitri celebrations.

Other Unique Search Trends Prior Aidilfitri 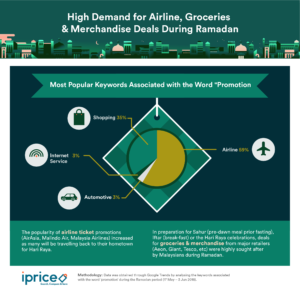 Utilising Google Trends, there is also a high search interest for airline ticket promotions in Malaysia and Indonesia before Ramadan. This is in line with local trends since many will be travelling back to their hometown prior Aidilfitri celebrations. Search interest for airline tickets began during the second half of May 2018 which takes place a month before the Aidilfitri celebrations on 15th of June.

In Malaysia, the most popular keywords and brands associated with “promotion” were “Airasia”, ”Malindo Air” and”Malaysia Airlines”. In Indonesia, inhabitants located in Sumatera, Kalimantan and Sulawesi were most interested in airline ticket promotions as compared to other states. This indicates that inhabitants in these regions were more likely to travel to the Java Islands or to other parts of the country for Aidilfitri.

Other than airline tickets, the second most popular keyword used in Malaysia were related to groceries and merchandise deals. During Ramadan, there is a high demand for Raya goods such as biscuits, traditional delicacies and other food stuff. Since these items are usually available at major supermarkets and stores many Malaysians are on the lookout for promotions by major retailers in order to maximise their spending. The top brands associated with the keyword “promotion” were:

Data of the average sessions per hour in Malaysia and Indonesia were obtained by comparing online traffic between 17 May – 3 Jun 2018 (Ramadan) and 19 Apr – 6 May 2018 (Before Ramadan) on http://iprice.my with Google Analytics.

Data of Malaysia’s four most searched fashion eCommerce platforms, most popular fashion products and other search trends were obtained on Google Trends during the Ramadan period (17 May – 3 Jun 2018).

iPrice Group analyses the increased online shopping consumption during the month of Ramadan added by Newsroom on June 7, 2018
View all posts by Newsroom →