Imagination works with the University of Cambridge, Lume brings scientific data to life

By Newsroom on November 13, 2018Comments Off on Imagination works with the University of Cambridge, Lume brings scientific data to life

Independent global creative agency Imagination announces Lume; in collaboration with The Lee Lab at the University of Cambridge. Lume is an innovative virtual reality (VR) platform for analysts to better visualise, discover, explore and share their data.

Lume leverages the power of immersion and data analytics to make highly complex data intuitive to understand, patterns easier to recognise and insights more compelling to present and share with everyone.

Lume transforms data, bridging the gap between data science and data consumption – by including human-centred elements to data exploration and presentation. This technology can help researchers and analysts uncover and publish new insights from their data across different industries, as data is becoming increasingly hard to digest and articulate to different audiences. Imagine exploring Lidar scans from self-driving cars, identifying outliers in financial data, studying the location of single receptors on immune triggering proteins from inside a white blood cell or finding patterns in astronomical data. 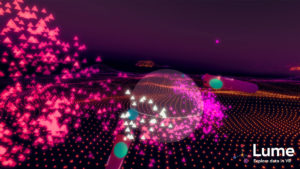 In 2014, Imagination’s Chief Technology Officer, Anton Christodoulou, launched the Imagination Labs open innovation programme, to foster innovation across the organisation and support new talent. Creative Technologist, Alexandre Kitching, and Developer, Alexander Spark, joined the programme on one of the Labs first R&D projects, looking to explore how immersive technology and AI could be used to enhance live experiences. The first prototype, a multi-user VR experience pushing the limits of what is possible with this new medium, was presented live on the Innovation stage at Cannes Lions 2017.

This journey took an amazing turn when Kitching and Spark met Dr. Steven Lee and Dr. Alexander Carr, from The Lee Lab, who were presenting their highly complex 3D super-resolution microscopy data at the Science Museum. Using academic standard 2D graphs, which appeared flat, they were finding it hard to engage and bring to life the full potential of their pioneering work for a novice audience. Kitching and Spark envisioned harnessing the power of Virtual Reality to help solve that problem and make science more accessible to all, and so Lume was born.

Initially designed to solve a visualisation problem, during the first user testing session at University of Cambridge, it became apparent that Lume was providing a whole new perspective. Scientists could see patterns they had not seen before when using traditional 2D interfaces.

Lume is now being used as a data exploration and presentation tool, helping The Lee Lab find and share insights from their super-resolution microscopy data, which in turn is helping them better predict the onset of Arthritis and Type 1 Diabetes. 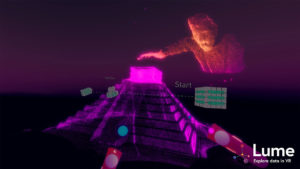 Data is becoming increasingly complex, connected and dimensional, and only a few people have the skills or expertise to make sense of it. The disconnect between Humans and Data is growing and 2D software is failing at providing the solutions needed.

Lume’s algorithms instantly humanise any dataset and brings it to life, making complex and dense datasets tangible and explorable by rendering millions of points from multidimensional datasets in real-time. Points can be scaled, rotated, highlighted and selected in 3D via virtual reality controls as well as providing analysis and clustering features such as nearest neighbour analysis, density plots etc.

Imagination is hoping that Lume will help make new discoveries from complex data and improve public engagement in scientific disciplines, through translating data into a visually stimulating and intuitive experience, offering everyone an opportunity to understand important information and engage with it.

Imagination focuses on building customer experiences – including experiences using immersive technologies such as virtual, mixed and augmented reality – for brands looking at innovative ways to engage their customers. Lume can leverage these skills into the scientific realm for Imagination.

In order to scale and make Lume accessible to as many people as possible, Imagination Labs is spinning this project out as a start-up. Lume was selected to be part of this year’s cohort of Augmentor, the immersive technology acceleration programme of Digital Catapult, and was unveiled live on stage at Web Summit in Lisbon this week. An Alpha Release of Lume is now available to download for free on Steam. 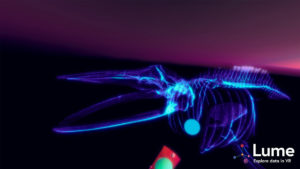 Anton Christodoulou said: “We created the Imagination Labs Programme to push the boundaries of what is possible when combining creativity and technology, and to support new talent. What began life as a project to explore how new technology could be used to enhance live experiences has transformed into a pioneering passion project for advancing scientific research. I am very excited about the possibilities that Lume offers, which has the potential to lead to incredible scientific discoveries and redefine what we expect from new technologies such as VR.”

Alexander Spark said: “We started Lume with the dream to make exploring data intuitive and natural but soon realised that by connecting data from different sources we could trigger surprising new discoveries.”

Alexandre Kitching said: “This project was spawned from the fact that scientists are finding it difficult to communicate and visualise their research. We discovered that current tools are not adapted or accessible enough, and that VR actually offers an accessible and intuitive way of exploring and understanding fundamental research. What started out as a passion project has quickly grown into something that has the capability to speed up the analysis process, and hopefully will have a part in curing illnesses and making incredible discoveries.”

Dr Lee, Founder of the TheLeeLab at the University of Cambridge added: “Although this tool is in its infancy, it has already proven to be invaluable. The whole team have had the privilege of seeing a single human immune cell isolated in VR, which we have physically been able to explore in nanoscopic detail. Imagination has created the multi-user VR environment for researchers to explore, understand, explain and interact with their own point cloud data and we are very excited to use it here at the University of Cambridge. We envisage this to have a huge impact, not only in our own research community but in lots of other research disciplines.”

Imagination works with the University of Cambridge, Lume brings scientific data to life added by Newsroom on November 13, 2018
View all posts by Newsroom →