By Newsroom on April 3, 2017Comments Off on Greenpeace launches VR app to transport people to ‘amazing’ locations around the world 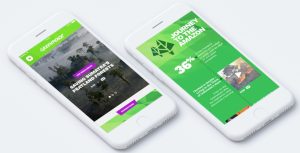 Environmental organisation Greenpeace UK has teamed with AllofUs, a design consultancy, to launch a VR app that gives its supporters the opportunity ‘to experience amazing places like the Amazon and Artic first-hand’.

The Virtual Explorer app provides viewers with 360° films that transport them to various precious environments across the globe, and enables them to help protect these environments via petitions and donations.

“We all know that much of our planet’s remaining wilderness is under threat. But these places we never visit, and rarely even see,” said John Sauven, executive director at Greenpeace UK. “So we worked with the team at AllofUS to think about the best ways to use technology to bring our audiences much, much closer to the amazing places we’re campaigning to protect.”

The app is available to both Android and iOS users, and the films can be viewed in 360° via smartphone only. However, to get the full experience, users will of course need a VR headset and headphones. For this reason, Greenpeace has produced its own rainforest-themed VR cardboard headset from recycled materials, which accompanies the content and can be accessed for a donation of £6.

Greenpeace launches VR app to transport people to ‘amazing’ locations around the world added by Newsroom on April 3, 2017
View all posts by Newsroom →